Sheffield United will host Southampton for the third round of the 2021/22 EFL Cup. The Saints are on a three-match winning streak against Sheffield and will look to extend this run at Bramall Lane on Tuesday, September 21.

Free Match Tips from Punditfeed for Sheffield United vs Southampton

Here are some bias-free tips we have put together for Sheffield United vs Southampton.

In the last five H2H matches, we have seen both teams involved in 11 goals at an average of 2.2 goals per match. Southampton claimed three clean sheets in those matches but that trend is under threat as Sheffield are showing the tendency of scoring goals in recent outings. The Saints will be unfazed by their rivals given their improvements in defence that saw them shut out Manchester City this past weekend. Consequently, we are predicting an Under 2.5 total goals as a conclusion to this EFL Cup fixture.

In four matches of their last five meetings, only one team has succeeded to get on the score sheet and we believe this match will see the continuation of this trend. Sheffield United have scored 13 goals in their last five matches while Southampton has 11, scoring eight in the last EFL Cup fixture against Newport. But the visitors have recorded three clean sheets in the last five outings and are in the position to repeat those heroics against their lower division rivals.

Blades anager Slavisa Jokanovic would be happy with the recent performance of his team, which sees them unbeaten from their last five matches. They got in the third round of the EFL Cup with a win against Derby, where they were down 0-1 but settled the final result as 2-1. But the lack of wins has put them fifteenth on the EFL Championship points table.

Southampton has not been able to get a win in the league so far, but they have managed to draw against Manchester United and Manchester City. They have four points with four draws in their five matches of the 2021 Premier League. Three players from the team won’t make an appearance in this game due to fitness concerns. However, will not be bothered by his side’s lack of wins as the team continues to impress with each outing against teams of a higher calibre.

Looking for the best odds for Sheffield United vs Southampton? We’ve got you covered. Check out our list of odds from the popular bookies and a few important stats to help you make a good prediction.

FAQ about Sheffield United vs Southampton 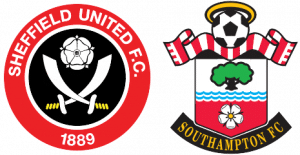