This preview focuses on the battle in the bottom six as Seongnam take on Suwon at the Tancheon Sports Complex.

Top Betting Tips and Predictions for Seongnam vs Suwon

Seongnam went out of the Korean FA Cup at the hands of second division outfit, Gimcheon Sangmu, after a 3-2 loss in extra time. Suwon did not have FA Cup duties in the midweek, but they did lose a lead twice in the 2-2 draw with Incheon United. For this match, the best predictions would be:

Seongnam have not exactly been able to blow away the opposition with their goals. The team has averaged (six goals in seven matches) less than a goal per game at home. The visitors almost have an identical goal average in away games, as Suwon have been prolific only at home. This match could be a low scoring encounter just like two of the last three meetings between these two clubs.

The away form of Suwon might be sketchy with the team failing to score in three out of their last four trips. However, they are up against Nam-il Kim’s men, who are quite disappointing in terms of shutting out the opposition at home. In the last five matches that take place at the Tancheon Sports Complex, Seongnam have managed one clean sheet – against strugglers Gwangju.

Match Preview of Seongnam vs Suwon

Seongnam would be able to overtake Suwon with a victory this weekend. The team has done well to keep themselves in the frame for the top six places. Nam-il Kim’s men cannot drop more points or they risk being cut off from the top six. After a decent start of the campaign, Seongnam have been quite poor since the home win over Gwangju on match day 9.

After a disastrous beginning to the 2021 campaign, Suwon have been able to steady the ship in the last few weeks. Even then, the team needs more wins rather than draws to be able to catch and overtake Jeju United. Since some teams in the top six are showing signs of weakness, Suwon need to be in a position where they can capitalise.

Analysis of Stats for Seongnam vs Suwon

FAQs on Seongnam vs Suwon match 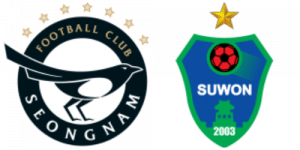 This match will be held at the Tancheon Sports Complex.

The team ranked as a favourite for three points in this match would be Seongnam.