El Verde will try to achieve its third undefeated game, with a win they could move to the top of the table. After a couple of stumbles in the season, La Academia has finally recovered the level of the previous tournament and is starting to run over the rivals.

The best Picks and Predictions for Sarmiento vs Racing Club

To set the right bet for Sarmiento vs Racing Club, read about our predictions and betting tips for free:

The clashes between El Verde and La Academia have had only one winner, since 2015 they have played 4 matchups and Racing has won all of them. Although Sarmiento has won their 2 home games, we think Fernando Gago’s side will maintain the same level as last time out and hand El Verde their first home defeat.

Whenever these 2 teams meet, there are likely to be a lot of goals as each h2h averages 3 goals per game. In fact, in the last meeting, there were 5 goals on the scoreboard. So we expect the result this time to be over 2.5 goals.

In 3 of the last 4 h2h, both teams scored in the same match. In their last away game, Racing scored. While Sarmiento also scored the last time they played at home. We predict that both will score in what promises to be an exciting duel.

The green team visited Platense on the last matchday. Israel Damonte’s team had a very poor performance, as they lost possession of the ball and barely had a few shots on goal, on the contrary, their rival took advantage of the possession of the ball to create several chances to score but without success. The match ended in a 0-0 draw, the first draw for Sarmiento who had already won 2 and lost 2. They are now in 13th place with 7 points.

After La Academia’s last result, many teams will be trembling when they face them, as Fernando Gago’s team crushed Alfosivi 5-0, the same result as their previous h2h. In this match, Racing was totally superior and from the start took advantage of their opponents’ fragility. In the first half, Emiliano Vecchio and Enzo Copetti scored the first two goals, and in the second half, it was Leonardo Sigali, Rufino Lucero, and Jonatan Gomez.

The Latest Analysis of Sarmiento vs Racing Club Stats and Odds

If you want to bet on the top odds for Sarmiento vs Racing Club, check our selection of odds from the best betting sites: 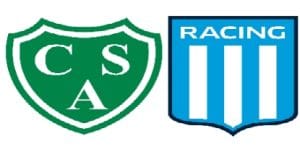 Who is the host? Sarmiento is host at Eva Peron Stadium in Buenos Aires

Who is the bookmakers’ favourite to win? The more probable winner is Racing Club at 10/11 (1.91) odds