The home team will try to get back to winning ways after 2 draws and 1 defeat in the last 3 matches. The visitors are motivated after their first win of the season and will be looking for more.

To set the right bet for Sarmiento vs Defensa y Justicia, read about our predictions and betting tips for free:

Since 2014, they have met five times, and the home side has always won. In that period, Sarmiento played four times at home and Defensa only once.

Their most recent meetings have had plenty of goals from both sides, but the winner has always had a good margin of difference over their opponents. We think that the green will be great at home, and will get the 3 points again.

The last 3 matches between the two teams have had a high number of goals, with 2.5 goals scored in all of them. In that period the average goal scored is 4.33 goals per game, so there will likely be a lot of goals in this one as well.

El Halcon and El Verde have scored at least once in their last 3 meetings. The most recent was in the group stage of last year’s tournament, although it was a game with 2 solid defences, there were no clean sheets. So we expect that this will also be a close game, but that both will put the ball in the net.

El Verde frustratingly lost their three-match unbeaten run as they were reduced to a player early on. After just 30 minutes, Franco Quinteros was sent off for an elbow in the face of an opposing player.

From the start, the Canalla had had the better chances, and from the moment they had an extra player, they controlled the game completely. Goalkeeper Sebastian Meza kept a clean sheet with many saves, but in the 76th minute, he was unable to keep out a header inside the six-yard box.

Sebastian Beccacece’s side was finally able to break their six-game winless streak and move off the bottom of the table. Although still in the bottom half of the table, El Halcon is now closer to the middle of the table and needs another win to start their fight for important positions.

In the previous match, Defensa started the game with two goals from Aldosivi in the 11th and 18th minutes. With that result, El Tiburon controlled the game until the 40th minute, when Patricio Boolsen was sent off. Defensa y Justicia took advantage of their numerical superiority to come from behind.

If you want to bet on the top odds for Sarmiento vs Defensa y Justicia, check our selection of odds from the best betting sites: 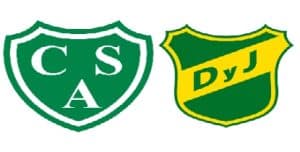 Who is the host? Sarmiento is host at Eva Peron Stadium in Buenos Aires

Who is the bookmakers’ favourite to win? The more probable winner is Defensa y Justicia at 27/20 (2.35) odds