The last match of the upcoming round in the Brazilian Serie A is the Sao Paulo vs Santos duel, so check our preview of the game if you want to know more about it and get free betting tips along the way.

Our best betting predictions for Sao Paulo vs Santos

If you can’t decide on a bet for the Sao Paulo vs Santos duel, check our favourite betting tips for this match:

While both teams are having a bad season, Sao Paulo is doing a bit better. After all, Santos is currently just one point above the relegation zone, while Sao Paulo is four points ahead of Santos. In any case, this should be a very close duel, but Sao Paulo is without a loss in the last four matches and they are playing at home, so our prediction is for Sao Paulo to win this match.

Sao Paulo and Santos to Draw at Half Time

As we already mentioned, we expect this to be a very close game. And while we also expect Sao Paulo to win, we don’t see them having an easy job. So, our prediction is for the game to be equal at half time and the winner to be decided in the second half of the game. This would not be unusual since Sao Paulo drew at half time in eight of their eleven matches at home this season, while Santos drew in five of eleven away games in Serie A.

We did not see both teams score in the last three head-to-head meetings between Sao Paulo and Santos and we don’t see that happening in their upcoming duel either. After all, both teams have scored in just 36% of all Santos fixtures this season in the league, while the same is true for 48% of all Sao Paulo games in Serie A so far.

The latest stats and top odds for Sao Paulo vs Santos

If you wish to bet on the top odds for the Sao Paulo vs Santos duel, take a look at our list of odds taken from the best bookies:

While these teams are not in great form this season, this is still one of the biggest derbies in Brazil. So, let’s take a closer look at the teams before they meet:

It’s been a tough season for Sao Paulo so far since the team is still too close to the relegation zone for comfort – only five points away at the moment. However, the team has done well recently since they are without a loss in their last four matches, although three of those games have been draws, with just one win. In any case, Orejuela, Couto, Vinicius, and William will miss the games with Santos due to injuries.

The team that reached the final of Copa Libertadores last season is currently in serious danger of getting relegated to Serie B. At the moment, Santos is just one point ahead of the first team in the relegation zone and they will have a stressful remainder of the season for sure. Santos is without a win in the league in the last eight games and they have a lot of injury problems right now – too many injured players to list here. 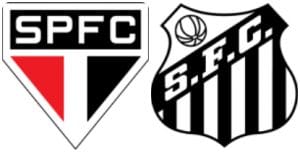