This matchup has already taken place in the Brasileirao, on that occasion the result was a draw. So check our preview of this game to learn more about it and to get some free betting tips.

Our Latest Betting Tips and Predictions for Sao Paulo vs Ceara

To set the right bet for Sao Paulo vs Ceara, read about our predictions and betting tips for free:

Although the last six duels between Sao Paulo and Ceara all ended in draws, we expect this game to be different and for the home team to get the win to break this streak.

After all, Sao Paulo has done a little better than its rival so far in Serie A and they are currently Copa Sudamericana spots, while Ceara is just a few points over the relegation spots.

The last six duels between Sao Paulo and Ceara have all ended in the same result except for the most recent matchup that ended: 2-2. So, we think there will be over 2.5 goals again.

As we already mentioned, both teams have scored in the last six head-to-head duels between Sao Paulo and Ceara since they all ended in BTTS draws. So, we can see both teams scoring in this game too.

Will It Be A Match Similar To The One Played In The Brasileirao?

The home side has been inconsistent in the domestic competition, picking up just four points in their last five games. The Tricolor had been held to four draws, and this streak was halted only by a 1-0 loss to Atletico Paranaense last time out.

On matchday 20, Sao Paulo visited The Furacao, a match with a lot of intensity, in which both teams had many shots on goal but without much accuracy. The only difference was two penalties in favour of Paranaense, Felipe Alves saved the first one, but in the second one, he was not so lucky.

An away win in the first leg would be the ideal way for Ceara to put their Brasileirao situation behind them. There, Marquinho Santos’ team suffered two consecutive defeats in the last two rounds.

After the dismal results, Ceara was removed from the places that give access to European competitions and was only four points above the relegation places. Their latest defeat was at home to tournament leaders Palmeiras, who scored twice in the first half. Ceara could only reduce the lead with a penalty goal in the 80th minute.

A Great Analysis of Sao Paulo vs Ceara Stats and Odds

If you want to bet on the top odds for Sao Paulo vs Ceara, check our selection of odds from the best betting sites: 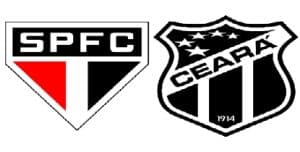 Who is the bookmakers’ favourite to win? The more probable winner is Sao Paulo