The home team hopes to get its first points and vacate the last place after losing the first game. The visiting team has only 1 point after two games. To set the right bet for Santa Clara vs Oliveirense, read about our predictions and betting tips for free:

The Top Betting Tips and Predictions for Santa Clara vs Oliveirense

The two teams have not met for 4 years when Santa Clara was still in the second division. In that last match, The Azoreans played away and still managed to beat Oliveirense.

Currently, the visiting team is going through a bad moment in both league and cup, so their chances of winning are slim. The home team lost their first game playing with one man less, we think that by playing without adversity they will be superior to their rival.

The away team’s goal average is low in both league and cup, so we don’t expect them to score many goals in this match. 5 of Oliveirense’s last 6 games ended with less than 2.5 goals.

In the Portuguese league, Santa Clara averages less than one goal per game, so they will probably score once or twice at most. Even against weak teams, the home team tends to score a few goals.

We expect at least one clean sheet in the Santa Clara vs Oliveirense matchup, as neither team has a good offensive line. The top scorer of the visiting team is Michel, who scored only 4 goals in 12 matches.

In the case of the home team, the statistics are even worse. Three players have scored 2 goals each, making them the team’s top scorers. With more than 10 games played, the average of each player is only 0.2 goals per game.

The Azoreans should be a bit relaxed in this group as they are one of the two teams that belong to the first division of Portugal. However, Santa Clara started by losing to Leixoes, one of the three second-division teams in Group G.

As expected, the Mario Silva team took an early lead with a goal by Rildo. Unfortunately, after 30 minutes, Cristian Tassano received a red card, leaving Santa Clara with 10 players. In the second half, Leixoes took advantage of the superiority of players to turn the match, which ended 2-1.

The Unionists are in a serious situation, as they played their first two games against the other two second-division teams and only got one point. Now they have to face the two teams in the main league of Portugal.

The previous day they played at home against Feirense. This match had little excitement due to the few goal-scoring chances during the 90 minutes. Neither team was able to overcome the rival defense, so everything ended in a goalless draw.

Useful Analysis of Santa Clara vs Oliveirense Stats and Odds

If you want to bet on the top odds for Santa Clara vs Oliveirense, check our selection of odds from the best betting sites:

FAQs about Santa Clara vs Oliveirense 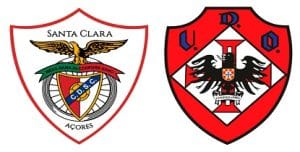 Match schedule – The matchup will take place on 29th November at 19:45.