The Latest Picks And Betting Tips for Rochdale vs Grimsby Town

The home team are bottom of the table and their next opponents are only one point ahead of them. Both teams are motivated after winning the first round of the EFL Cup, now they will try to do the same in League Two. To set the right bet for Rochdale vs Grimsby Town, read about our predictions and betting tips for free:

Rochdale’s superiority every time they play Grimsby Town is absolute, they have won 100% of the last four meetings, conceding just one goal in total. Most of their games were many years ago the most recent was in 2018, The Dale won 2-0 away. The Mainers have only just made it into League Two, we think they will lose yet again as they will need more time to adapt.

Based on the statistics we can deduce that they will put a lot of balls in the net, as in 80% of their last meetings the result was less than 2.5 goals. In the current tournament, they are two of the teams with the worst attacking power, as they have only scored once. The last time the two teams played at Crown Oil Arena Stadium there were only two goals.

Both The Dale and The Mariners have struggled to create attacking moves, so we think there will be at least one clean sheet. The home side has not conceded in four of the last five meetings against Grimsby Town and has scored at least one goal in the last four h2h.

Rochdale’s side suffered their second successive league defeat, this time to Gillingham, who won 1-0. Coach Robbie Stockdale knows that his side must up their game quickly as if they continue to perform in the same way they are likely to continue to underperform. Rochdale had just four shots, four of them wide.

Paul Hurst’s side had their first game at home, and although his players tried to take all three points at home, they could only manage a point with two minutes to go. Grimsby Town fired over 20 shots at the Northampton goal, but it was The Clobbers who opened the scoring with fifteen minutes remaining. Although 18th in the league, at least they won in the first round of the EFL Cup.

A Brief Review of Rochdale vs Grimsby Town Stats and Odds

If you want to bet on the top odds for Rochdale vs Grimsby Town, check our selection of odds from the best betting sites: 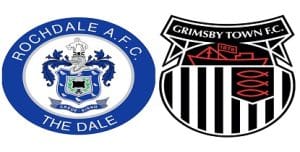 Who is the host? Rochdale is the host at The Crown Oil Arena Stadium in Rochdale

Who is the bookmakers’ favourite to win? The more probable winner is Rochdale at 13/10 (2.30) odds