For the second time in a row, Gimnasia failed to win and continues to lose the battle for the lead. Once again El Millonario stumbled in their attempt to win in the Argentinian league, only to be held to a draw.

To set the right bet for River Plate vs Gimnasia La Plata, read about our predictions and betting tips for free:

El Millonario has dominated the series against Gimmasia in recent years, winning three times and drawing once since 2018, with no wins for El Lobo. It has been more than 15 years since Gimansia defeated River at the Monumental.

The Copa Libertadores fixtures left River a little shaken, but we think they can improve their performance by focusing on fewer tournaments. We are confident that the home side will get the win at home.

In the 4 games in which Gimanasia has been away, the score has never been higher than two goals. Both teams are characterised by a good defensive line, so we expect few goals.

Clean sheets have been present in 2 of River’s 3 home games. 4 months ago was their last h2h, and El Lobo failed to score a goal, so we deduce that both teams will not put the ball in the net.

Who Will succeed In This Matchup? – River Plate vs Gimnasia La Plata Preview

After being knocked out of the Copa Libertadores, River had some consolation by advancing to the next round in the Argentine Cup. This success fails to consolidate in the local tournament, where they have only 9 points after 8 rounds.

The Muñeco Gallardo’s team had a thrilling duel against Velez, one of the teams at the bottom of the table. As rarely happens in the championship, River lost possession of the ball and despite leading for most of the match, conceding the equaliser in the injury time of the second half.

It has been difficult for coach Nestor Gorosito to get back to the good rhythm with which they started this season. They have only picked up 1 point in 2 games, while the teams at the top of the table are ahead of them.

One of the most worrying things for El Lobo is not having beaten Colon, a mid-table team. Despite having 19 shots at the Sabalera goal, only two were unsuccessful. Thus, the match ended in a goalless draw.

If you want to bet on the top odds for River Plate vs Gimnasia La Plata, check our selection of odds from the best betting sites: 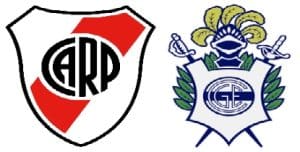 Who is the host? River Plate is the host at El Monumental Stadium in Buenos Aires

Who is the bookmakers’ favourite to win? The more probable winner is River Plate at 1/2 (1.50) odds