Real Sociedad are flying in La Liga and a win here would make their position in the Europa League look pretty rosy too. Can they get the three points though? Find out with our Real Sociedad vs Sturm Graz preview here along with the predictions and free tips we mention along the way.

Sociedad to win with a clean sheet

Real Sociedad have kept three clean sheets in their last five games; they’ve only conceded to Atlético Madrid and Athletic Bilbao in that period. Sturm Graz will be relatively easier opposition. They have lost four on the bounce and six of their last seven games too. On top of that, Sturm Graz have lost every game they’ve played in this tournament, while Real Sociedad have no losses in 14 games across all competitions. Sturm Graz managed just one shot on target in the first leg of this tie, and that was at home. For this reason, we believe Real Sociedad will win without conceding.

The hosts will lead at HT and see it through

Athletic Bilbao’s Muniain scored a stoppage time equalizer against Real Sociedad last weekend; that was the first time Sociedad conceded at home in La Liga this season. Real Sociedad have been really efficient at home; they haven’t lost in seven home games this season across all competitions. Sociedad have kept five clean sheets in those seven games, conceding just two. Sturm Graz have only managed one goal in this tournament, it’ll be difficult to score at a stadium where Barcelona couldn’t win in 10 years.

The best odds for Real Sociedad vs Sturm Graz

The final word on Real Sociedad vs Sturm Graz 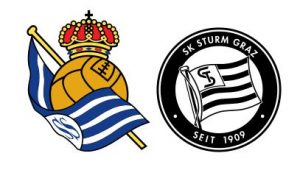