The Spanish side, Real Sociedad, lock horns with the French outfit, Monaco, in the second game of Europa League, Group B. We have prepared a detailed preview of this game, including the best free predictions in this post.

Real Sociedad and Monaco are presumed favourites to claim playoff spots in Group B. The hosts bagged a draw in the first match but hope to bag all points in this fixture. Can they do it against Monaco? Our best free picks for this game are as follows:

Our first pick for this game is that both sides will find the net. While Real Sociedad hasn’t lost in the last seven matches and only failed to score in one of them, the visitors are unbeaten in four games. Both sides have been phenomenal in front of the goal and look set to score at least once in this game.

There has been one meeting between these teams, a fixture that ended 2-1 in favour of Real Sociedad. Sociedad will host Monaco after a club-friendly fixture the hosts won in late July this year. With both sides having a good run of form and a remarkable scoring record, our second tip backs more than two goals at full-time.

Real Sociedad to open the scoring

Our third prediction for this game is that Sociedad will score first. The hosts are having a great run of form and so is their defence that has been formidable compared to Monaco’s. In the last seven matches, Sociedad kept five clean sheets, four of which were victories. On the other hand, Monaco kept one clean sheet in their last seven games. Monaco’s shaky defence means they are predisposed to conceding the first goal in this game.

Take a look at our match preview below for more details about this fixture:

Real Sociedad kicked of their Europa League campaign with a draw in the first group stage fixture against PSV. The hosts failed to hold onto a 2-1 lead at the break when PSV equalized six minutes before the hour mark. Notably, Real Sociedad defeated Monaco 2-1 in a friendly fixture back in July and hopes to build on that to bag another victory. With home advantage, Sociedad should put in a shift to get at least a point in this game.

Having lost to Sociedad in July, Monaco comes to this fixture wary of the opponent’s high-pressing play style. After some inconsistencies, the visitors have not gone undefeated in four games. They come to this match with a 3-1 victory in the last two matches. Moreover, Monaco hope to hold onto the first spot Group B after this game even though a trip to Spain comes with some bad memories against the matchday hosts.

Real Sociedad vs Monaco: Top UK bookies with the best odds for this game 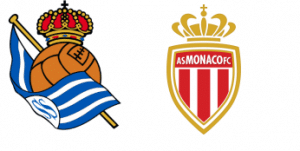 How did they perform in the first Group B fixture?

Read Sociedad bagged a point in Eindhoven, Netherlands in the first fixture against PSV while Monaco defeated Sturm Graz in the first match to claim three points,