Rangers vs Hibs; it’s not the game many would have predicted to be a top two clash is it? Who will be top when the final whistle sounds? Find out with our Rangers vs Hibs preview here along with the predictions and free tips we mention along the way.

Rangers arrive in this match as big favourites in betting terms but in reality we’re not convinced it’s that clear cut. We’re backing a draw. Hibs remain unbeaten in the league after seven games but have drawn two of their three away games. Despite zero losses, Hibs are still behind Rangers who have won one more game. Steven Gerrard’s men will of course be looking to make that an extra two wins here but their Europa League loss – and the travel – will give Hibs an edge. We think it’s too tight to call.

Our next prediction is that this game will be a low scoring one. Rangers have come in under 2.5 goals in each of their last five games and their season long average in home games is just 2.0 goals. Hibs aren’t exactly the great entertainers either; they’ve seen two of the last five games fall short of the 2.5 cut off. Their goal average in that time has been 2.2. Nine of those stats suggest a goalfest awaits. Nor does the head to head record; two of the last three meetings have seen just the solitary strike.

Martin Boyle is still the man

Right, most people would think of goal scorers and default to the Rangers roster. That’s not us. The best goal scorer that will be on show Sunday is Hibs man Martin Boyle. Boyle has scored the most goals in the Premiership this season and has bagged three in his last three games. There won’t be many goals in this game – see our previous tip for the logic behind that statement – but if a chance falls at the feet of Boyle Rangers could well find themselves picking the ball out of the net.

The best odds for Rangers vs Hibs

Rangers are sitting top of the standings but they’ve not looked as convincing as last year and with their rivals, Celtic, off the boil others might sense an opportunity. The good news for Steven Gerrard is that his team are spreading the goals around; they’ve hit 12 in the league so far but not a single player has more than two. They are facing a few injury issues though with Filip Helander, Nnamdi Ofoborh, Ryan Kent and Ryan Jack all out.

One of the teams potentially sniffing a chance to pip Rangers this year is Hibs. They’re currently unbeaten in league football. They’re another team with plenty of players who will bang in goals but they have a clear star man at the moment, which is Martin Boyle. Like their hosts, they have a few injury concerns too. Josh Campbell could be back for this game though.

The final word on Rangers vs Hibs 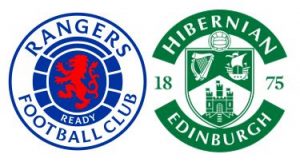