PSV Eindhoven and Real Sociedad gear up for a mouthwatering clash at the Philips Stadium in their first game of the Europa League group stages.

PSV had a 3-0 win over AZ Alkmaar during the weekend while Real Sociedad beat Cadiz 2-0 at home.

Odds are subject to change and readers should always check with the bookmaker before placing a bet.

Real Sociedad have been much more solid than PSV coming into the game. It is also undeniable that Real Sociedad play the game in a league which has a standard than the Dutch Eredivisie. Last season, Real Sociedad went through the entire Europa League campaign without an away defeat. This included matches against the likes of Napoli and Manchester United. Imanol Alguacil’s men have made a good start to the season and it places them as a good candidate to back for a win.

Since conceding four goals in the opening game of the season, Real Sociedad have kept a clean sheet in three consecutive matches. The Spanish team has come up against winnable opposition during this run, but PSV offer a greater threat. In European games, however, PSV’s offence has been muted with only one goal scored in the two legs against Benfica.

PSV Eindhoven have made a dream start to the new campaign. They’re currently on top of the league standings with four wins from four games and have conceded only three times.

The Dutch outfit would be playing in the Champions League group stages this season if not for the 2-1 aggregate loss to Benfica in the qualification stages. However, Schimdt’s side would be eager to make a strong start to the competition where they’d also play the likes of Sturm Graz and AS Monaco.

A winning start would be crucial to their cause since only two teams will be guaranteed progression to the next round.

The Basque giants have made a fairly decent start to the new campaign and are currently in fourth place in the league standings. They haven’t scored as freely as their Dutch opponents but Imanoli Alguacil’s men are a disciplined side and not easy to break down.

However, the team’s inability to score as freely as they should might haunt them in their Europa League campaign where they would be playing against two sides that have a lot of firepower upfront.

The former World Cup winner has started coming into his own in the Netherlands and scored three goals in six Champions league qualification games. While he might not be the same player he was at Dortmund, the 29-year-old’s experience is going to be crucial for his team’s chances of going all the way in the competition.

The veteran Spaniard has pretty much done it all. At Sociedad, he’s the elderly statesman who brings calm to their midfield while adding much needed creativity in the final third. If the former Manchester City man is able to strike the right chords with Alexander Isaac, Real Sociedad could have a successful season.

FAQs on PSV vs Real Sociedad 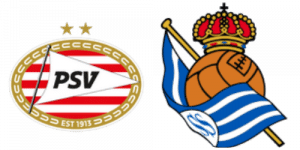 Where can I watch PSV vs Real Sociedad via livestream?

You can livestream PSV v Real Sociedad on DAZN.

Which bookmakers are recommended?

You can make bets on Unibet, Bet365, 1xBet and 22Bet. One should check if the bookmaker is available in the country of residence.

When does the match kick-off?