The Portsmouth vs Shrewsbury matchup in the third League One round might seem less interesting than some others, but we expect to see an exciting game nonetheless. So, we have prepared a preview of the match for you, along with free betting tips.

Our betting tips and predictions for Portsmouth vs Shrewsbury

If you are trying to find the best Portsmouth vs Shrewsbury bet, take a look at our favourite betting tips for this match:

With two wins at the start of the new League One season, Portsmouth showed their high ambitions and intention to finally get back to Championship. With that in mind, and taking into account that Portsmouth beat Shrewsbury in three of their last five duels, our prediction is for Portsmouth to win this game.

Just like our previous prediction, this one is also based largely on the recent head-to-head history between the two teams since we’ve only seen both teams scoring once in the previous five meetings between Portsmouth and Shrewsbury. So, we don’t expect both teams to score in this game either.

Portsmouth vs Shrewsbury preview: An easy job for Portsmouth?

These two teams had very different starts to the new League One season, so let’s take a more closer look at both teams ahead of their upcoming match:

The former winners of the FA Cup have barely missed the playoffs in League One last season and that was surely frustrating for their fans who have been waiting for a return to Championship for quite a time now. On the bright side, Portsmouth started the new season with two wins in the first two League One rounds, although they were eliminated from the EFL Cup after losing to Millwall.

Despite the fact that Shrewsbury ended last season in the 17th spot in the League One standings, the team was never in any danger of getting relegated from the league. Still, their fans will probably hope for a step forward this season, but the team’s goal still remains to avoid relegation. Unfortunately, Shrewsbury got off to a wrong start with a couple of losses in the league, but at least they managed to eliminated Lincoln City from the EFL Cup after they did better on penalties.

The best stats and odds for Portsmouth vs Shrewsbury

If you are searching for the best Portsmouth vs Shrewsbury odds, check our selection of odds from different UK bookies:

FAQ for Portsmouth vs Shrewsbury 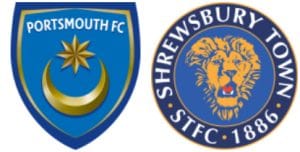