This article will help you find the top free betting tips and predictions for the upcoming League One match between Portsmouth and Plymouth.

We gave our betting experts time to come up with the top free tips for the Portsmouth vs Plymouth fixture, and this is what they came up with:

These odds are from Betfred and are subject to change. This means that although they were correct at the time of writing, you should check if they have changed before betting.

Four out of the last five matches between Portsmouth and Plymouth ended with a draw. Also, Plymouth is near the top of the League One table with fourteen points and only one loss this season. Their opponents on the other hand are firmly placed in the mid-table ranks with only ten points, so far. Also, they lost three out of the last five matches they played in the League.

Both Plymouth and Portsmouth’s games this season ended on the low-scoring end of the line, so, likely, their head-to-head match on Tuesday won’t result in many goals. Three of the last five matches for Plymouth and four of the last five matches for Portsmouth ended with under 2.5 total goals scored. Both teams have a season average of under 2.1 goals per game for the whole season.

Our Conclusion About the League One Match on Tuesday

Plymouth is very close to the first position in the League One table with fourteen points, so far, which is only two points behind the current leaders – Wigan. Although they haven’t won a match against Portsmouth in quite a while, the Pilgrims’ recent form suggests that Tuesday will end positively for them.

Portsmouth has positive results against Plymouth in the past, but their recent form consists of three losses out of the last five matches they played. This says plenty about our conclusion for Tuesday’s match. It will be highly unlikely for the mid-table Pompey to win.

All the recent stats, scores, and bookmaker odds for the Portsmouth vs Plymouth fixture are in the tables below. 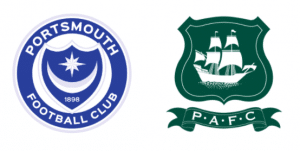