This preview looks at two teams who are in the middle of a slump going up against each other. Pohang Steelers, who are without a win in four games, go up against Seongnam in a home match.

Pohang Steelers went four games without a victory since beating Johor Darul Ta’zim in the AFC Champions League, and the latest game for the team saw them get only a 1-1 draw with Daegu. A battle between the bottom two teams – Gwangju and Seongnam – ended in a goalless draw.

This is a game between two teams who have struggled to pick up victories of late. Pohang Steelers started the campaign very well but they are winless in four games. Seongnam are stuck at the bottom of the table with an inability to even get positive results against teams around them in the table. In an away match, Seongnam are expected to sit back and allow Pohang Steelers to dictate the ball while sitting deep.

The game has two teams who have struggled to create many opportunities in recent matches. After having seen Pohang Steelers and Seongnam come up with just under a goal per game over the last three matches, there is not a great deal of confidence to expect goals out of this encounter.

Seongnam have scored only twice in the last six meetings against Pohang Steelers. However, the team’s away record has been quite decent in recent away matches with the team only failing to score against Gwangju in the last five.

Pohang Steelers have to deal with a number of injury problems ahead of this match. They had to contend with injuries even at a time when results have not been so great. A lack of wins in the last five matches has seen the team drop down to sixth. Mario Kvesic, Hyeon-seong Kim, Manuel Palacios, Ho-nam Kim, Sang-hyub Lim, and Kwang-hyeok Lee are unavailable.

After regularly breaking through the opposition defences, Seongnam were unable to get crucial goals in the game against Gwangju. The lack of a win from this match keeps Seongnam on their toes with regards to avoiding relegation. The leaky defence has conceded in five out of the last six matches. Jong-sung Lee and Jae-won Lee are unavailable for the match.

Pohang Steelers vs Seongnam – Key Numbers ahead of the Match 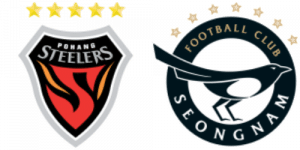 Where is the match going to take place? Steelyard Stadium