Plymouth will be facing Sheffield Wednesday, and below, we will present you with the best betting tips and predictions for the match.

Our Predictions Regarding Saturday’s Plymouth vs Sheffield Wednesday

Our betting experts spent time reviewing the upcoming Plymouth vs Sheffield Wednesday match and this is what they came up with:

All odds from Betfred are correct at the time of writing, but also subject to change. Remember to check them out before you place these bets.

Sheffield Wednesday has been in the top four teams of the tournament when it comes to team form since it started. They even had the chance for more points last week, but their match against Sunderland was postponed until further notice. Compared to Plymouth, they are definitely the favorites. There aren’t any injured or suspended players on their squad, and we hope no injuries occur during the match.

Plymouth started out the season at the middle of the table and they seem to be hovering there after every matchday. We find it hard to believe that they will beat Sheffield Wednesday on Saturday even if their latest head-to-head games ended that way (back in 2010 and 2011). They also don’t have any injured or suspended players on the squad.

In the tables below, you can check out the most recent statistics and odds for the upcoming League One match between Plymouth and Sheffield Wednesday. 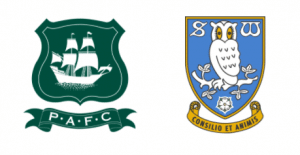