Our Peterhead vs Queen’s Park prediction for this game is available to you completely for free! Make sure to check our remaining Scottish FA Cup predictions by visiting our designated page.

The two teams have plenty of history between them for us to know that the game on the 26th of November is going to be a real clash between two old acquaintances.

The two teams played plenty of games against each other. It’s fair to say that neither one of them likes the underdog position so both of them rely heavily on attacks. Six of the last 10 games between them ended with over 2.5 goals. Peterhead always scores against Queen’s Park in the home games at Balmoor Stadium but Peterhead a team from a lower division and Queen’s Park are favorites to win this game.

In the last 10 games between these two teams, we saw many different outcomes. Peterhead won on five occasions, Queen’s Park emerged victoriously four times, and one game ended in a draw. Queen’s Park are without a doubt the favorite to win this game as they are playing at a higher division football in Scotland but Peterhead will enjoy the home-field advantage for this game. The scales might be balanced on the 26th of November and we will get to see a draw between these two teams.

Six of the last 10 games between the two teams ended with both teams scoring at least one goal. More than three years have passed since we last saw one of these teams not score a goal in the direct games between them. The game on the 4th of May, 2019, ended with 0:2 away victory for Peterhead against Queen’s Park. We believe we will see traditions be honored in this game and both teams will score.

Check out the information below in order to make a top bet on this game.

Peterhead are currently at the bottom of the table in the Scottish League One and the chances for relegation are certainly potent. The team has one victory, four draws, and 11 losses in just 16 games.

Queen’s Park are in 4th place in the Scottish Championship and are a prime candidate for promotion this year. The team has 27 points and needs only three points to reach the top of the table. Queen’s Park have lost only one game in the last five league games.

Here are the most interesting Peterhead vs Queen’s Park betting odds and head-to-head stats:

Interesting Peterhead vs Queen’s Park questions and answers for this game: 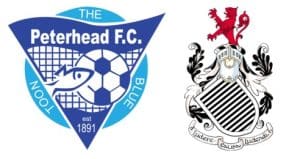