Paris would be determined to continue where they left off the last game in their next engagement against Rodez. While the visitors look to extend a two-match winning streak.

Free Match Tips from Punditfeed for Paris vs Rodez

Here are some bias-free tips we have put together for Paris vs Rodez.

After playing five winless matches in a row, Rodez came back with two consecutive wins before this match. Paris also rediscovered their victory in the last match after four games without a win. The last three consecutive H2Hs between the teams have ended without a win. Furthermore, only the home side between these teams has managed to get the lead in the last five H2H duels. The Blues have been able to clip Rodez in their home to a 2-2 draw. So we base our prediction for the home side to take the lead in this match.

Most of the recent games of teams have gone by getting them on the scoresheet. Both teams have scored in four of their last five games. In addition, four of the last five H2H duels have featured a BTTS outcome. So based on the recent ability to cross the goal line of both teams, we predict this match to follow the same trend of the last two H2Hs of BTTS output.

An own goal in the last game of the Blues helped them to take over Dijon. The most worrying thing for the Parisians would be the lack of defeats, being able to collect only two victories in the last five games. But With the help of six wins and five draws in 14 matches of the season, they stand in sixth place on the table. Axel Bamba and Cyril Mandouki won’t feature in this game due to injuries.

The Bloods and Golds finally got their momentum back with two successive victories. The team was restricted to 0-0 in the first of the last match but took an impressive lead of 3-0 at the end. They are currently ninth on the table with five wins and five draws. Amiran Sanaia will be the only player to miss the coming game due to cancer.

Looking for the best odds for Paris vs Rodez? We’ve got you covered. Check out our list of odds from the popular bookies and a few important stats to help you make a good prediction.

FAQ about Paris vs Rodez 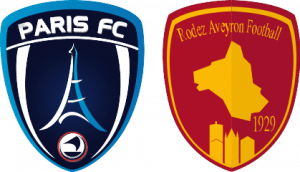