Both teams need to get back to winning ways after drawing their previous matches in the Brazilian league. We have analyzed the stats and previous results of both teams to bring you the best predictions, betting tips, and picks.

To set the right bet for Palmeiras vs RB Bragantino, read about our predictions and betting tips for free:

The visitors have shown poor attacking play in their last 2 games, where they have barely managed to get 3 shots on target. On the contrary, Palmeiras is one of the most offensive teams with more shots per game. That’s why we think the home side will convincingly take all three points.

The total number of goals in Palmeiras’s last 5 matches is 20, which is an average of 3.40 goals per match. It all makes us think that in the match against Bragantino there will be a minimum of 3 goals.

One of the disadvantages Palmeiras have had at the start of the season is that due to their attacking play they tend to leave spaces in the defensive lines, which is why in 70% of their meetings they have conceded goals. The visitors have conceded 1 goal in each of their last 3 meetings. That’s why we think both will be able to score in the next matchup.

After losing on matchday 1 of the Brasileirao, Palmeiras went on a 9-match unbeaten run with 6 wins and 3 draws between Copa Libertadores, Copa Do Brazil, and Brazil First Division. However, all three draws have been in the local league, which is why they are in 13th place outside the places to access the South American tournaments.

On matchday five Palmeiras hosted Fluminense, where they had 19 shots but only five on target.  A goal in the 72nd minute made us think that the locals would get the victory, but Fluminense equalized in the 83rd minute to seal the match.

Bragantino could not get their third win in a row in the Brasileirao and had to settle for a draw against Atletico Mineiro. Bragantino managed to strike the first blow in the 13th minute but would lose possession for the rest of the game and could not even get another shot on goal.

After being behind Atletico Mineiro laid siege to the rivals’ goal, Bragantino were able to contain them in the first half but not in the second half. In the 66th minute, the Galo levelled the score at 1, which would not change again.

If you want to bet on the top odds for Palmeiras vs RB Bragantino, check our selection of odds from the best betting sites: 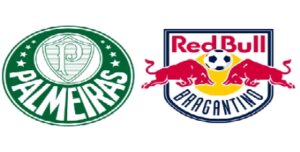 Who is the host? Palmeiras is the host at Allianz Parque Stadium in Sao Paulo

Who is the bookmakers’ favourite to win? The more probably winner is Palmeiras at 8/15 (1.53)