The first game of the third round of Serie A is the match between Palmeiras and Corinthians. The two fierce rivals meet once again and we have a detailed preview of the match for you, along with some betting predictions:

Our top betting tips and free predictions for Palmeiras vs Corinthians

You may struggle to choose the right bet for this game, so we have prepared a few of our favourite betting tips for Palmeiras vs Corinthians to help you out.

Despite the fact that Palmeiras will miss many players that will appear in the upcoming Copa America, we expect them to beat Corinthians in their Serie A duel. First of all, Palmeiras will have the home-court advantage and they have been doing well so far this season after getting out of their Copa Libertadores group and winning their previous Serie A game. Furthermore, Palmeiras has won three of the last five meetings with Corinthians.

Three of the previous five head-to-head matches between Palmeiras and Corinthians have gone under 2.5 total goals, so our prediction is for this game to follow the same path. In addition to this, Corinthians has gone under 2.5 total goals in their last four matches in all competitions, while the same is true for three of the last four Palmeiras matches.

Both teams had to face disappointment after their mid-week games since both teams have been eliminated from the Brazilian Cup. In any case, let’s check the two teams in more detail:

Despite finishing the last season in seventh place, the fans were not disappointed much by it since Palmeiras won a double crown with wins in the Copa Libertadores and Copa do Brasil. In the first two rounds of Serie A, Palmeiras has one win and one loss, although the loss was away from home and against the current champions Flamingo. Also, the team was eliminated from the cup after losing to CRB on penalties. In addition to injured Kuscevic, Danilo, and Veron, the team will also be without a few other players that are due to play in Copa America.

The season didn’t start that well for Corinthians after they lost to Atletico Goianiense in the first round of Serie A and the first leg of the Copa do Brasil. The impression for one of the most decorated Brazilian teams was somewhat improved in the previous week after they managed to beat America Mineiro. They also drew with Atletico Goianiense in the second leg of the cup, so they won’t be playing in that competition anymore. Avelar, Jemerson, Ruan, and  Bicalho are injured, while Otero is on international duty.

Top odds and stats for Palmeiras vs Corinthians

The odds for Palmeiras vs Corinthians can vary a lot, depending on the website. We have collected the odds from top UK bookies right here:

FAQ for Palmeiras vs Corinthians 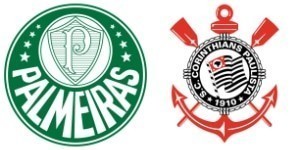