In one of the more important matches of this La Liga round, Osasuna and Elche will try to gain an edge in the fight against relegation. To learn more about these teams and to get free betting tips, read our following preview.

Our top free predictions for Osasuna vs Elche

The match between Osasuna and Elche could have a lot of impact on the final standings, so check our top free betting tips for this match:

While the match carries more urgency for Elche who is in the relegation zone, Osasuna will certainly have a motive to win this game and further remove itself from the fight for survival. Osasuna is in better form since they haven’t lost in their last four games in La Liga. Meanwhile, Elche has failed to win in their last six games. The h2h record between these teams is balanced, with three draws and a win for each team in the last five duels.

The odds on this prediction are pretty high, which means that the bookies are not expecting a lot of goals. However, our prediction is based on the head-to-head record between Osasuna and Elche since they’ve gone over 2.5 goals in three of their last five meetings. Furthermore, their previous duel this season ended in a 2-2 draw, so it’s obvious that these teams can score goals when playing against each other.

The Croatian striker is Osasuna’s top goalscorer in the league, with 7 goals in 22 matches. His goal against Villarreal last weekend proved to be a winning one and we feel that he might be scoring again against Elche. Osasuna had troubles with efficiency lately since they’ve failed to score in four straight games before putting two past Villarreal, and think that this might be a sign of things to come for the home team.

Even though Osasuna has a nice advantage over other teams in the fight against relegation, they are still not clear of danger completely. Meanwhile, Elche is looking for points that would get them out of the relegation zone.

A win against Villarreal in an away game in the previous round has given Osasuna a nice cushion over the teams further down the table and they are now eight points away from the relegation zone. They have also only lost once in the last five games, although three of those five games have ended in scoreless draws. Osasuna will be without Cruz and Ruben for the upcoming game against Elche.

Currently sitting in the relegation zone, Elche is certainly in a bind. However, they are only one point away from safety and the rest of the season will be very exciting in the fight against relegation since many teams are still in danger. The main reason for Elche to worry is their poor form since they’ve lost three of their last five games, along with two draws. Piatti and Carillo are out for this game due to injuries, while Fidel will serve a suspension for yellow card accumulation.

Top odds and useful stats for Osasuna vs Elche

Check our selection of odds from top UK bookies for the Osasuna vs Elche duel, along with some helpful stats: 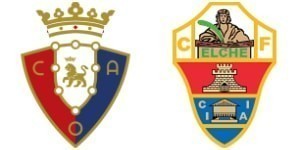