After 3 matchdays, the host has only 2 points, the same as their next opponent, who has only played twice. Although there are still many matches left in this group stage, it is essential to win in order not to move further away from the leader. To set the right bet for Oliveirense vs Arouca, read about our predictions and betting tips for free:

Top Predictions and Best Betting Tips for Oliveirense vs Arouca

Taking into account the dominance of the visiting team in their last games, we think that this time they will also play better than the rival. Oliveirense showed to have a very vulnerable defense, against Arouca this will be a big problem.

In the last h2h, The Arouquenses were superior to their rival and won with a wide difference. We predict that this duel will have a similar ending.

The home team has struggled to put the ball in the net, and the visitors’ defense is a bit more solid than Oliveirense’s recent opponents. So there are likely to be few goals, plus Arouca’s goals-against average is just 1.00 per game. The host’s average is even lower, 0.67 per game.

When the Unionists play at home, they become a wall, so it is difficult to overcome their defense. However, when they use this strategy, they lose offensive power, so we doubt they will score on this occasion. In fact, their last home match ended in a goalless draw, so it won’t be unusual for either team to keep a clean sheet.

The Unionists had a great performance the previous day when they visited Santa Clara. This was a very evenly matched duel, as both teams took turns attacking, creating great chances to score.

In the first half, both teams came close to putting the ball in the net, but both goalkeepers were attentive to repel the shots. In the second half, Oliveirense opened the scoring, but in the last 20 minutes, they preferred to retreat to protect their advantage. Unfortunately, in the 90th minute, Santa Clara equalized the match.

Armando Evangelista’s team needs to be more convincing to secure the victory because despite having many chances to score, they do not finish correctly. This leaves the rivals with the possibility of equalizing or turning the game around, as happened in the previous match against Leixoes.

The Arouquenses had control of the match throughout the first half, in fact, they generated the best scoring chances, but only scored once. Leixoes sat back for most of the game, but in the last 30 minutes, they went on the attack and got the equalizer.

Brief Review of Oliveirense vs Arouca Stats and Odds

If you want to bet on the top odds for Oliveirense vs Arouca, check our selection of odds from the best betting sites:

FAQs about Oliveirense vs Arouca 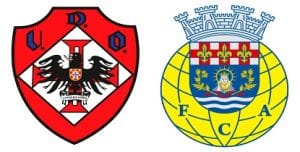 Match schedule – The matchup will take place on December 10th at 20:45.