Two sides that will, unfortunately, miss out on the Euro 2020, will get to the action in a friendly meeting on Sunday. This article will provide you with the best free betting tips for this game.

Here is our team experts’ take on the current match-up.

The odds are taken from Betfred and are true at the time of writing. Check your betslip before placing your final bet, as the odds can change at all times without notice.

Both teams are currently in a good form, losing a total of just 3 games in their last 20 combined. Norway is doing slightly better with 6 wins, 2 draws, and 2 losses, while Greece has 4 victories, 5 draws, and a single defeat. However, we can say that Greece’s opponents were a much bigger bite to chew. Nicknamed The Pirate Ship, the guests managed honorable 1-1 draws with both Spain and Belgium. Norway’s victories have come from games with Gibraltar, Luxemburg, and Montenegro, which isn’t too convincing.

The games involving the Greek National team usually wind up having few goals. John van’t Schip’s side seems to manage to slow down the tempo of its games to where it feels comfortable. Despite this they still concede regularly, managing to keep a clean sheet in only 4 of its last 10 games. Norway on the other hand is in good goal-scoring shape, managing to find the net in 8 of its last 10 matches.

Norway vs Greece: Let’s see what the numbers tell us

Check the most important statistics for the match at hand:

Can Norway break the curse against Greece?

Being valued as the slight favorite in this match-up by the bookies, Norway has actually had a very hard time playing against the Greek National Team. In fact, Greece has won both of their two previous meetings, maintaining a 100% success rate so far.

Their previous games have also been friendly meetings, although they are a little dated – from 2003 and 2012. Nevertheless, this is evident in the fact that Norway struggles to play against Greece. With recent impressive results against both Spain and Belgium, we believe that Greece is actually the more favored to win side, despite the bookies saying otherwise.

We also expect Greece to be extra fired up after the 1-1 draw against a world-class opponent like Belgium. On the other hand, such a tough match may prove to be draining and there’s a good chance the Greek side will let up. 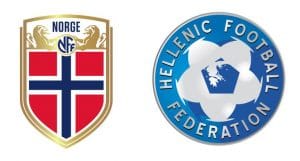