La Lepra is the sole leader but needs to get back to winning ways after two consecutive draws to avoid jeopardizing their lead. La Academia has 3 games without defeat but needs to get points away from home to move up the table.

To set the right bet for Newell´s Old Boys vs Racing Club, read about our predictions and betting tips for free:

The most recent meetings between Newell’s and Racing favour Fernando Gago’s team, which won and drew 2. The last time they met was 3 months ago in the previous tournament, La Academia had 72% ball possession and 26 Shots.

Newell’s have not beaten Racing Club for more than 6 years, and in their last 2 games, they have not been as effective. That is why we predict a game with many scoring chances in favour of the away team, which will end La Lepra’s unbeaten run in the league.

In the last two h2h there have been 3 clean sheets the last result was a Nil-Nil draw. In 2 of Newells’ 3 home games, gun clean sheets. Hopefully, only 1 team can score on this occasion.

Despite drawing last time out, the point gained was important for La Lepra to go top of the table. However, it was a wake-up call for Javier Sanguinetti’s side, who put in a dismal performance away to Platense.

There were very few clear-cut chances for Newell´s, who lacked the ideas to create chances. Their only goal came from a mistake by the rival goalkeeper who received the ball badly and deflected it into his net. La Lepra tried to defend the lead, but Platense levelled the score in a minute.

In their last match, Fernando Gago’s team showed all their attacking power against Independiente. From the first minute to the end of the game, Racing had clear chances to score and were in little danger in defence.

Despite winning 1-0, it was evident that La Academia continues to have finishing problems, as they lacked a lot of accuracy in their shots. Even Enzo Copetti took a penalty kick and sent the ball against the post.

If you want to bet on the top odds for Newell´s Old Boys vs Racing Club, check our selection of odds from the best betting sites: 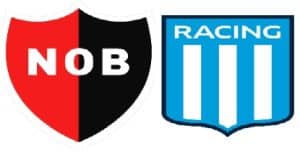 Who is the host? Newell’s Old Boys is Coloso Del Parque Marcelo Bielsa Stadium in Rosario

Who is the bookmakers’ favourite to win? The more probable winner is Racing Club at 6/5 (2.20) odds