The league table and overall form make this match look like an obvious home win. Do we think it will actually play out that way though? Find out with our Motherwell vs Ross County preview here along with the predictions and free tips we mention along the way.

Motherwell find themselves fourth in the table as things currently stand and with the form they’re in it wouldn’t be a surprise to see them climb closer to the top; they’re unbeaten in form having drawn with Rangers last time out and won the three games prior to that. Ross County meanwhile can’t buy a win; they’re winless in six and have taken just three points from the 18 available in those matches. This feels like a home win all day; the only surprise is that the odds aren’t shorter.

At least two goals to cheers for the Motherwell faithful

Our next tip focuses on the number of goals we expect Motherwell to bag in this game; we’re opting for over 1.5. The reason for this is because although they’ve only scored two goals or more goals in two of their past five games they’re up against a rather leaky back line. Ross County have shipped a total of 13 goals in their past five games; that’s an average of  2.6 goals against. The last five head to head games have seen Motherwell score 11 goals combined too!

A clean sheet and three points for Motherwell

Our final prediction is for Motherwell to win to nil. The stats won’t leave you feeling like this tip is nailed on to come in but the odds are certainly attractive enough to make up for it. So, what do the stats look like? Well, Ross County have blanked twice in their last five games and have averaged one goal per match in that time. Motherwell, however, have kept a clean sheet in their last two wins and have conceded just one goal – against Rangers – in their last three games.

The best odds for Motherwell vs Ross County

Motherwell have kicked off their campaign in style this year with 11 points from six games. Tony Watt and Kevin van Veen have been the ‘goal getters’ but with just six goals conceded their defence deserves a nod too. New man Juhani Ojala has looked very impressive early on.

Ross County’s start to the season has been poor; even when measured against their low expectations. No wins and just five goals is a pretty pathetic return from their opening six games. That said, Blair Spittal hit a brace last time out to give their fans a glimmer of hope. He’ll be needed again Saturday for his team to stand any chance of getting a much needed win.

The final word on Motherwell vs Ross County 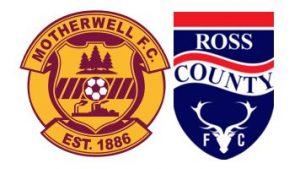