In this article, we will check out the Morecambe vs Accrington fixture this weekend and recommend our picks for the top free betting tips and predictions.

Here are the top free betting tips and predictions we came up with regarding the upcoming Morecambe vs Accrington fixture.

All odds are from Betfred and although they were correct at the time of writing, they are subject to change. Before wagering, make sure to check your bet slip for any changes.

In the past whenever Accrington faced Morecambe, they prevailed in most of the matches, specifically they won four of the last five head-to-head fixtures against Morecambe. When it comes to recent form, the two teams are in the same boat with three losses and two wins out of the last five League One matches played.

Match Preview, News, and Injuries for Morecambe vs Accrington

From a table leader, thanks to two losses in a row Accrington became one of the mid-table teams. This match on Saturday against Morecambe, who has two points less in the table, could be the way for them to get back up. From last season, Yeboah Amankwah still hasn’t recovered from his knee injury and he won’t be playing this weekend.

Morecambe hasn’t played well this season and it’s a miracle they even got ten points at all. Also, their head-to-head history with Accrington is negative, which won’t help things this weekend. Forward Shayon Harrison won’t be attending the match because of an ankle injury he sustained in February this year.

Latest Odds, Statistics, and Team Form for Morecambe vs Accrington

These are the most recent match statistics for both Morecambe and Accrington, so check them out before the event.

Morecambe vs Accrington: Important Q&As You Should Read 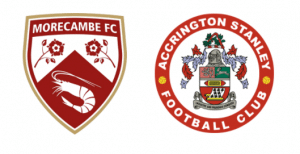