Millwall go up against two-time winners of the EFL Cup, Leicester City, for a third round match at home. Leicester will be hoping to match the exploits of the recent semi-final appearance against Manchester United.

Millwall were involved in a third consecutive stalemate during the weekend after being held to a 1-1 draw by Coventry City. Leicester City’s poor form continued with the team losing 2-1 against Brighton during the weekend.

Leicester City have been going through a very poor form especially in away matches with the defeat against West Ham and Brighton at the start of the season. The foxes face a tough fight to get into the next round, as Millwall are unbeaten in the last five matches in all competitions. The Den is always a very difficult place for visiting teams. Due to the recent form, Leicester do not enjoy status as overwhelming favourites and this could work in their favour.

Leicester City have been involved in high scoring matches in 4 out of the last five games. Millwall could have gone through similar statistics had it not been for surprising goalless draws against the likes of Swansea.

Leicester City have been scoring and conceding goals over the last few games. Brendan Rodgers’ men have not kept a clean sheet since the opening game against Wolves. This even includes conceding seven goals in the last three away matches. Millwall have failed to score only once in the campaign and their scoring record at the Den goes back to 6 consecutive games.

Millwall vs Leicester: Can the foxes overturn their poor form?

Millwall have done well to put together a lengthy unbeaten streak, but the team will be very concerned about being closer to the bottom three than any of the play-offs despite this amazing run. The Londoners will be without George Evans, Dan McNamara, Benik Afobe, and Sheyi Ojo for this game.

Rodgers is coming under a heap of pressure following a string of results. However, the foxes could feel hard done by some of the recent decisions that have gone the way over the last few games. There is plenty of work to be done behind-the-scenes if Leicester are to come back strongly. The club will be without Jonny Evans, James Justin, Wesley Fofana, and Nampalys Mendy due to injury.

Analysing the EFL Cup Stats for Villa vs Leicester

Doubts ahead of Millwall vs Leicester game 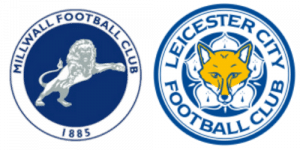 Where is the match going to take place? The Den

Who are the favourites to win the game? Leicester