After a disappointing Champions League qualifier, Midtjylland will hope to put things right in the Europa League group match against Ludogorets at the MCH Arena this week.

Midtjylland warmed up for this game with a 2-0 victory over Nordsjaelland during the weekend. Meanwhile, Ludogorets were able to register a 2-0 success over Cherno More to make it four consecutive wins in all competitions. Both teams have been going through a very difficult patch of form.

Midtjylland to win the game

Midtjylland undoubtedly have more pedigree than Ludogorets when it comes to the European competitions. After having had a tough qualifying stage in the Champions League, Midtjylland are back in the Europa League after almost 2 years. Ludogorets have a very poor record in the Europa League from last season after losing six consecutive matches. The team does not tend to perform well in these games even if their recent form is good.

Ludogorets have a very disappointing record in the Champions League and Europa League competitions. Apart from the 2-0 win over Dinamo Brest in October 2020, there has been no joy for Ludogorets in the Europa League matches over the last two seasons. Despite struggling for consistency, Midtjylland are capable of scoring a couple of goals due to Ludogorets’ poor defence.

Midtjylland have registered three clean sheets in the last four matches. Brondby are the only team to have scored past Midtjylland since the team was beaten by PSV in the early Champions League qualifiers. Meanwhile, this is not the case with Ludogorets, who tend to concede a lot of goals. The poor form of Ludogorets in Europe could lead to Midtjylland getting a clean sheet.

Analysing the Stats for Midtjylland vs Ludogorets

Midtjylland are close to further cementing their superiority in the Europa League rather than in the Champions League. After this first match against Ludogorets, Midtjylland will be going up against Portuguese outfit Sporting Braga in the next Europa League game. There are no injury problems for Midtjylland boss Bo Henriksen.

The big problem for Ludogorets coming into the game would not be consistency or recent form. However, the chief concern would be the limited availability of players. Ludogorets boss Valdas Dambrauskas will be missing several key players including Wanderson and Cauly.

FAQs on Midtjylland vs Ludogorets game 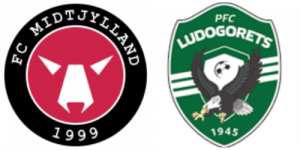 Where is the match going to take place? MCH Arena

Who is the favourite team to win the game? Midtjylland