A match with a lot of adrenaline is expected, in which none of the teams will want to give up three points. Cuiaba is the leader and only a defeat by two goals would give Club Atlético Melgar a pass to the round of 16.

The latest Picks and predictions for Melgar vs Cuiaba

To set the right bet for Melgar vs Cuiaba, read about our predictions and betting tips for free:

The Peruvian club looks superior to the away team, we believe that Melgar will have a slight advantage due to the altitude of their stadium. This will make it a close game, so the visitors will not have as many scoring opportunities as they used to have. So, we predict a Melgar will get The 3 points with some difficulty.

The Peruvian club will advance to the next round if they can beat Cuiaba by two goals and Racing loses. Both teams will likely leave spaces in defense to score goals that will take them to the round of 16. So we predict that there will be more than 2 goals in this matchup.

On matchday 1, both teams had a new number of shots, which ended with 3 goals on the total scoreboard. Once again, we expect both teams to put the ball in the net and give us an exciting Group G final.

The Arequipa club waits for the Brazilians for the last matchday of the Copa Sudamericana. The ‘Domino’ is hoping to reach the lead in Group B where it hopes to qualify for the next stage of the continental tournament. Néstor Lorenzo and his team were beaten by Cuiaba in the first matchday in Brazil Racing, but this time the challenge will be at home. It will be a great opportunity to take revenge and at the same time hope that Racing’s failure in its match against River Plate will allow it to advance to the round of 16.

With no chance of qualification, the away team is only fulfilling its responsibility, while the Peruvian club is still fighting for qualification to the next round. Cuiabá is coming off the back of a win against River Plate of Uruguay the previous matchday.

Cuiabá and Melgar met on the first matchday of this group stage. On that occasion, the three points went to the Brazilian team who won 2-0 with goals from Elton, a striker who is injured and will not play against the Peruvian team this Thursday.

The best analysis of Melgar vs Cuiaba stats and odds

If you want to bet on the top odds for Melgar vs Cuiaba, check our selection of odds from the best betting sites:

Common Questions for Melgar vs Cuiaba 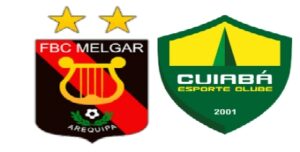 Who is the host? Melgar is the host at Monumental de la UNSA Stadium in Arequipa, Peru

Who is the bookmakers’ favourite to win? The more probable winner is Melgar