The Greatest Predictions And Betting Tips for Malmo vs GIF Sundsvall

The Blue Ones advanced through the Europa League qualifying round, and will now look to improve their position in the Allsvenskan. The visitors will be looking to break a dreadful run of five games without a win, including four defeats. To set the right bet for Malmo vs GIF Sundsvall, read about our predictions and betting tips for free:

Although a month ago Sundsvall defeated Malmo 2-1, in that game The Blue Ones had many chances to score but were unsuccessful. We think that this time, the home team will take revenge and get the three points against a team, in the last few rounds, has only known defeat.

The last time they met, Malmo had 37 shots, half of them on target: The Blue Ones scored just one goal on that occasion, but this time they will be playing at home and will surely treat their fans to more than one goal. On the last three occasions they have met, there were three goals, and we think there will be a similar amount of goals.

We think that only the home team will score and therefore there will be no BTTS. In the previous match, Malmo had 77% possession and Sundsvall had only 5 shots. In this match we expect the home team to be just as dominant, and the visitors to have no clear-cut chances.

Both Want To Win Again

Andrea Georgson’s side lost their run of three consecutive victories after failing to win away to Sirius. Despite starting first with a goal by Jo Berget in the 18th minute, Sirius turned the game around with two second-half goals. Malmo missed the chance to enter the top four but advanced to the Europa League qualification round.

Sundsvall has shown poor performance in their last few games, with four consecutive defeats and five matches without a win. After seventeen games Brian Clarhaut’s team has only ten points and is in last place. In their last match against Hammarby, they had only one shot on target without success, while their opponents shot thirty times and scored three goals.

The Best Review Of Malmo vs GIF Sundsvall Stats and Odds

If you want to bet on the top odds for Malmo vs GIF Sundsvall, check our selection of odds from the best betting sites:

FAQs About Malmo vs GIF Sundsvall 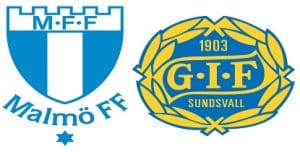 Who is the bookmakers’ favourite to win? The more probable winner is Malmo at 1/7 (1.14) odds