After completing their group stage matches of World Cup Qualifiers, Lithuania will host Kuwait for a friendly match in their next engagement. Both teams have been eliminated from the World Cup race

Free Match Tips from Punditfeed for Lithuania vs Kuwait

Here are some bias-free tips we have put together for Lithuania vs Kuwait.

Match Result: Kuwait to win @ “Odds yet to be announced”

Total Goals: Under 2.5 Goals @ “Odds yet to be announced”

Both Teams to Score: No @ “Odds yet to be announced”

Most of the goals the teams featured in their respective last games were the conceding goals. Lithuania has only three goals in the last five matches, while Kuwait has hit the target only twice in the previous five outings. So we think that the teams of this match won’t be able to collect a high-scoring total. Their last H2H meeting also followed the same outcome.

Lithuania and Kuwait have scored in only one of the last five matches, three and two respectively in their winning games. Kuwait conceded seven goals in their previous game but leaked only four in the four attempts before their last match. The Blue has also managed a clean sheet in those matches. On the other hand, Lithuania’s defence has conceded 12 goals in the last five outings. So it seems unlikely to see both teams scoring at the same time and the visitors are expected to repeat their last H2H pattern and go with the clean sheet.

Rinktine lost their last game against Northern Ireland by giving the lead with their own goal in the first half and ended the match without scoring 1-0. Lithuania was terrible in the WC Qualifiers and finished the group stage at the last of their group, getting only one win and seven defeats in eight matches.

The Blues got thrashed by the Czech Republic in their last match and got the defeat as 7-0. Kuwait has been eliminated from the World Cup race after playing the second round of qualifiers in June. But they finished second in their group and will play the third round of Asian Cup Qualifiers next year.

Looking for the best odds for Lithuania vs Kuwait? We’ve got you covered. Check out our list of odds from the popular bookies and a few important stats to help you make a good prediction.

FAQ about Lithuania vs Kuwait 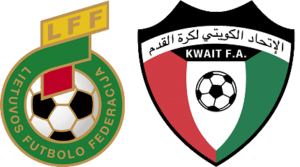 Who are the player’s to watch?