The home side started their season with a pair of League Two victories, while their next opponents managed just their first win. Both teams finished out of the EFL Cup. To set the right bet for Leyton Orient vs Mansfield Town, read about our predictions and betting tips for free:

The O’s dominate the head-to-head series against The Stags, in the last six meetings, Leyton has won three, there have been three draws, and Mansfield has won just one. Leyton Towns have scored first in 80% of their last five games and have not conceded a goal in the tournament. Based on these figures, we predict that The O’s will win their third game in a row.

In 60% of the last ten head-to-head meetings between Leyton East and Mansfield Town, the final score has been under 2.5 goals. In fact in the three h2h in the last two years, they scored only four goals, 1.33 goals scored per game. So we don’t expect many goals in this matchup.

Either team will likely keep a clean sheet as this has been the norm in their last three meetings there was a goalless draw. The home side has not conceded a goal in League Two. Oddsmakers state that there is more likely to be no BTTS.

In the previous round, The O’s won their first away game and remain one of the few teams to win in the first two rounds. Their victim was Crawley Town, with a 50th-minute goal from Thomas James enough to take all three points. Their success in the league was not matched in the EFL Cup, where Leyton lost 2-0 to Forest Green Rovers.

Mansfield picked up their first win on the previous matchday when they hosted Tranmere Rovers. Nigel Clough’s side dominated the game and had the better chances, yet in the first half, the score remained static until the 56th minute, when Boateng set up Riley Harbottle, who put the ball into the back of the net. Mansfield is another of the League Two teams that have been knocked out of the EFL Cup.

If you want to bet on the top odds for Leyton Orient vs Mansfield Town, check our selection of odds from the best betting sites:

Your Questions for Leyton Orient vs Mansfield Town 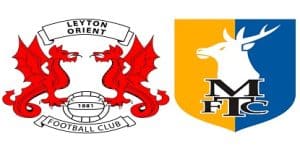 Who is the host? Leyton Orient is the host at The Breyer Group Stadium in Leyton

Who is the bookmakers’ favourite to win? The more probable winner is Leyton Orient at 33/20 (2.65) Odds