These odds from Ladbrokes are subject to change, so make sure to double-check them before you place any of these wagers.

Today, we will go over the Le Havre vs Pau match to find the top free tips and odds for their match this weekend. If you want to see more Ligue 2 predictions and free tips, you should head over to our website’s latest content.

Below, you can see our top choices for the Le Havre vs Pau best betting tips. You can also read the top predictions for the match on Saturday.

Le Havre and Pau have some of the worst forms in the first two games of the new season. It’s hard to say if they will get it together, soon, but in this particular situation, Le Havre has a better chance to win because they have the home-field advantage. They also never lost a home game against Pau before, so it makes it logical to favor them for Saturday’s game.

Since mid-July, Le Havre has one injured player on their roster – Abdelwahed Wahib is out with a cruciate ligament rupture. There aren’t any suspensions right now. We believe that Le Havre will use their advantage to win the match even if they aren’t in the best recent form.

Pau’s Jovan Nisic is out with a cruciate ligament rupture since January this year and he is still recovering. There aren’t any suspended players on the team. We don’t think Pau can beat Le Havre right now unless they improve their game fast.

In this section, we have prepared the most recent match histories and scores for both teams, so you can check out their team form.

Popular Queries Regarding This Weekend’s Le Havre vs Pau 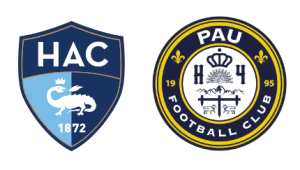