The home team got a point as visitors on the first matchday, but it was little for the dominance they showed. Despite the draw, El Halcon is motivated after stopping River Plate’s powerful offense on matchday 1.

The Predictions and Picks for Lanus vs Defensa y Justicia

To set the right bet for Lanus vs Defensa y Justicia, read about our predictions and betting tips for free:

2 wins for Defensa y Justicia, 1 draw, and 1 win for Lanus; that has been the balance of the last meetings between the two clubs. Their most recent duel ended 2-1 in favor of the Falcon, who had to play with one man less during the second half due to the expulsion of Kevin Gutierrez. Most of the players in that match will be available for Saturday’s match. We expect Defensa y Justicia to win again.

In the last 3 h2h, the final result was always over 2.5. Carlos Rotondi and Walter Bou were the scorers for Halcon in the last h2h, while Angel Gonzales scored the only goal for Lanus – all of them are part of the starting team so they will probably start from the beginning. So we predict a 2+ goal scoreline, the result of an entertaining match.

Both teams have yet to score in this tournament, and will likely go for their first goal since the whistle kick-off. Lanus has 11 consecutive games giving up goals against Defensa y Justicia and has also scored in 3 of the last 4. Both are likely to score at the Nestor Diaz Perez Stadium.

Lanus vs Defensa y Justicia Preview: who will win the Derby?

The home team obtained a valuable point in their visit to Rosario Central, however, Jorge Almiron’s team knows that they could have won, as they played better than their rival. El Granate had more than 60% of ball possession but only sent 3 shots at goal without much effectiveness. Lanus did not suffer in defense, but they were not very dangerous in the offensive phase, that is why the result was a nil-nil draw.

The most anticipated duel of the previous day, ended up being one of the great disappointments due to the lack of excitement, as both El Halcon and River Plate did not hurt each other, beyond a few shots on goal. Sebastian Beccacece must make some adjustments to get his team back to the scoring machine of last season.

If you want to bet on the top odds for Lanus vs Defensa y Justicia, check our selection of odds from the best betting sites: 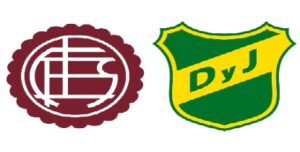 Who is the host? Lanus is host at Nestor Diaz Perez Stadium in Remedios de Escalada

Who is the bookmakers’ favourite to win? The more probable winner is Defensa y Justicia at 8/5 (2.60)