Our Top Betting Tips and Predictions for Kortrijk vs Sint-Truiden

The boys got an away win that strengthens them, now they will try to give the first three points at home to their supporters. The away side remains unbeaten but must get their first win if they are to climb the table. To set the right bet for Kortrijk vs Sint-Truiden, read about our predictions and betting tips for free:

The visitors are slightly favoured in this match, which we expect them to win. The last five meetings show that The Canaries have been superior to their opponents, with three wins for Sint-Truident, one for Kortrijk, and one draw. Sint-Truident has not lost away from home for seven matches, winning four and drawing three.

We think there will be no BTTS because the defensive style of the home team limits them from having good scoring chances. In the two duels played by Kortrijk, there was at least one clean sheet. In six of the last seven h2h, there was no BTTS.

Will Kortrijk Get First Win At Home?

Coach Karim Belhocine continues to search for the best style to suit his team. In the first matchday they lost at home, and in the second one, they achieved a surprising victory. The Guys aren’t doing much and are making very little effort to score.

They preferred putting eleven men behind the ball in their previous matchups. By the way, it was their best option in their last duel after Amine Benchaid was sent off for a hard foul.

The Canaries have not been good at keeping possession in their first matchups, even though, they scored at least once in every game. However, the line has made some mistakes in defence that have cost them the victory, and they have just two points in two games.

So far, Sint-Truiden’s best player is Japan’s Daichi Hayashi who has scored a goal in every game and already ranks among the top scorers. The striker will be one of the key players in the challenge against Kortrijk.

Our Latest Analysis of Kortrijk vs Sint-Truiden Stats and Odds

If you want to bet on the top odds for Kortrijk vs Sint-Truiden, check our selection of odds from the best betting sites:

Common Facts for Kortrijk vs Sint-Truiden 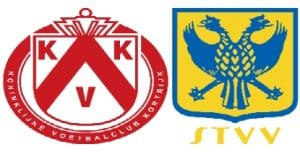 Who is the host? Kortrijk is the host at The Golden Spurs Stadium in Kortrijk

Who is the bookmakers’ favourite to win? The more probable winner is Sint-Truident at 5/4 (2.25) Odds