The only match of the Brazilian Serie A scheduled for Monday is the meeting between Juventude and Sport Recife. If you want to learn more about this duel, read our in-depth preview of the match and get a few betting tips in the process.

Our top free tips, predictions and picks for Juventude vs Sport Recife

The match between Juventude and Sport Recife is one of the closest in the round, so check our top betting tips if you need a bit of help:

We think it’s time for Juventude to get their first win in the new season. They are playing at home and their opponent is not much better in terms of quality, although they are in a bit better form after getting their first win in the last round. Since these two teams haven’t met yet, we don’t have any h2h score to base our prediction on, so we have to go with our gut and hope that Juventude can pull off a win.

Four of the last five Juventude fixtures in all competitions have gone over 2.5 total goals, so it’s not unreasonable to expect that to happen in this game as well. Meanwhile, Sport Recife has gone over 2.5 total goals in only two of their last five games, but they have a chance to win a second game in a row and we don’t expect them to play defensively in this match.

Since we expect to see at least three goals in this game, we also expect both teams to score. Both teams have scored in just two of the last five Juventude games, but that is mostly due to Juventude’s problem with scoring at the start of the season. However, this is a perfect opportunity for them to score a goal, while Sport Recife also has enough quality to put one in the home team’s net.

Both Juventude and Sport Recife have been without a win in the new Serie A season until the last round, but Sport Recife managed to get three points unlike Juventude. So, let’s check these teams in more detail now:

It’s been four rounds without a win for the newly-promoted side, so the fans are probably getting worried by now. At least not all four games have been losses for Juventude since two of them have been draws, but the situation may quickly turn dire if things don’t change soon. Furthermore, Juventude was also eliminated from Copa do Brasil earlier this year. Roberson and Matheuzinho are injured at the moment and won’t be available for the next game.

Unlike their upcoming opponent, Sport Recife finally got their first win in the new Serie A season in the last round after they beat Gremio 1-0 at home. In addition to this win, Sport Recife also has one draw and two losses in the Brazilian league. However, they were also eliminated from Copa do Brasil in the second round. Furthermore, Sport Recife also has a few injuries at the moment, so they won’t have a full squad at their disposal for the next match.

Top odds and stats for Juventude vs Sport Recife

If you want to bet on the best odds for Juventude vs Sport Recife, check our selection of top odds from a few bookies in the UK:

FAQ for Juventude vs Sport Recife 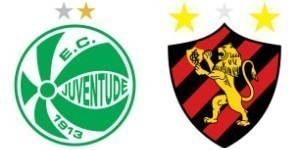