Junior will have the chance to take a big step in their bid to reach the quarter-finals. A defeat against Oriente Petrolero, who has no chance at all, would be a failure and put their qualification in jeopardy.

Goal to be scored/Both Halves - Yes

Our Best Picks and predictions for Junior vs Oriente Petrolero

To set the right bet for Junior vs Oriente Petrolero, read about our predictions and betting tips for free:

The Colombian club goes into the fifth matchday with everything on its side, as all the predictions are in their favour. This is due more to the poor performance of the Refineros than to Junior’s merit. So far the Bolivians have not taken their first points and apparently will not do so this matchday either.

In the previous h2h, Junior put the ball in the net three times, this time we think there will be a similar or even higher number o goals. Although, we predict this will be a game with plenty of goals, with the high probability that Junior will trash the Refineros again.

Goal to Be Scored/Both Halves – Yes

Oriente Petrolero has hardly had any scoring chances in their first 3 cup games; they have scored only two goals in the tournament. Moreover, they have not scored on the road yet, so we assume they won’t be able to score this time.

The Tiburón is second in Group H with seven points, one behind leaders Union Santa Fe and level with third-placed Fluminense of Brazil. To qualify, it depends on itself, but it has no margin for error. Winning the two remaining home games will give them a ticket to the last 16 without question.

Now they will have the opportunity to seal their qualification to the next stage against a team they already beat three weeks ago. Since that match in Barranquilla, Junior started a winning streak that they hope to extend at home.

With three defeats in the first half of the group stage, Oriente Petrolero has all but said goodbye to the quarter-finals. They have failed to make a difference to any of their opponents, and have shown themselves to be the weakest team in the group.

In the Bolivian league, they have not lost any of their last four games and are in fourth place. Last weekend, the Bolivians achieved a great 2-1 victory over Atletico Palmaflor. The Bolivian side comes into the game on the back of a 2-1 home defeat to Santa Cruzante last weekend. They are currently fourth in Group A of the local league, three points behind leaders Palmaflor.

The best analysis of Junior vs Oriente Petrolero stats and odds

If you want to bet on the top odds for Junior vs Oriente Petrolero, check our selection of odds from the best betting sites:[

FAQs for Junior vs Oriente Petrolero 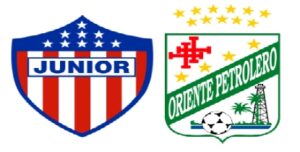 Who is the host? Junior is the host at Castelao Stadium in Fortaleza, Brasil

Who is the bookmakers’ favourite to win? The more probably winner is Junior