The visiting team needs a win to be part of the grand final. However, the other two members of the group must draw, so the team from Pereira will become the leader.. To set the right bet for Junior vs Deportivo Pereira, read about our predictions and betting tips for free:

Our Right Betting Tips and Predictions for Juniorvs Deportivo Pereira

In the first h2h of this Championship phase, Deportivo Pereira was totally superior but had some lapses in defense. That is why the match ended with many goals on the scoreboard and a victory for Deportivo Pereira who scored the final goal in the 99th minute.

The away team scored the most goals in this group stage, while Junior is the team with the most goals conceded. In the first meeting between these two teams there were a total of 7 goals. Based on this data, we think it will not be strange if there are more than 2.5 goals in this duel.

Pereira’s team has achieved very good results in the last few matchdays. Lately, they scored a lot of goals but also conceded several, so in 5 of their last 7 games, both Pereira and their opponents scored at least one goal.

Pereira was the first to score in 5 of the last 7 games but conceded at least one goal in all 7. Taking into account the data of the visiting team, who has a chance to advance to the final, in contrast to Junior, we deduce that both teams will score.

The team from Barranquilla has only one point and therefore has no chance of advancing to the final. Junior’s weak point was their poor defense, averaging 1 goal scored per game but 1.80 conceded.

The last game was very disappointing, as after a goalless draw in the first half, Junior conceded a goal despite playing with an extra man. This was their fourth loss in 5 group stage matches.

The Grande Matecaña started the group stage with some irregular results, which raised doubts about their chances of advancing to the final. However, the team from Pereira won its last two matches and has a good chance of being one of the finalists.

Great Analysis of Junior vs Deportivo Pereira Stats and Odds

If you want to bet on the top odds for Junior vs Deportivo Pereira, check our selection of odds from the best betting sites: 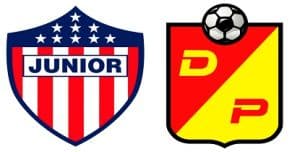 Match schedule – The matchup will take place on December 1st at 01:45.