Sao Paulo will invade Cochabamba looking for its third victory in the continental tournament, while Jorge Wilstermann will try to hold off the assault of the Brazilians.

The latest Jorge Wilstermann vs Sao Paulo predictions and picks

To set the right bet for Jorge Wilstermann vs Sao Paulo, read about our predictions and betting tips for free:

The Bolivians have not been able to triumph against apparently more accessible opponents, even when playing at home. In their last matches, they have shown a fragile defense while the Tricolor from Sao Paulo has great offensive power.

Although the altitude of the Bolivian lands will be a negative factor for the Brazilians, they are used to succeeding in overcoming obstacles.

The Sao Paulo team cannot come out with the same intensity they usually use in each of their matches due to the altitude issue. The team coached by Rogerio Ceni will try to open the scoreboard quickly and control the match with long possessions.

In short, there will be no more than two goals at the final whistle.

Despite the Aviador’s last three draws, they have been able to score in each of those games. However, in the South American Championship, they have scored only once through a penalty kick.

For those reasons and the few goal chances they had in the tournament, we assume that they will not be able to score this time.

On the previous day of Copa Sudamericana, El Aviador lost unexpectedly against Ayacucho and is placed together with Everton in the third position of Group D. Then, the Bolivians have tied in 3 consecutive matches in the local league, getting 3 points out of 9.

These last results leave them out of the playoffs and for the moment they remain fifth in Group B of the Bolivian First Division.

The Brazilians had a promising start to the season, with two victories in the Copa Sudamericana and a 4-0 thrashing to Paranaense in the Brasileirao. However, after the South American break, the Tricolor Paulista lost once and drew twice, dropping from first place to eleventh in the Brazilian Seria A.

Now they will have a tough test against a team that appears to be weaker but usually takes advantage of the altitude of Cochabamba.

If you want to bet on the top odds for Jorge Wilstermann vs Sao Paulo, check our selection of odds from the best betting sites:

Some frequent questions for Jorge Wilstermann vs Sao Paulo 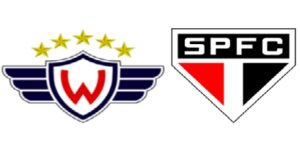 Who is the host? Jorge Wilstermann is the host at Felix Capriles Stadium in Cochabamba, Bolivia

Who is the bookmakers’ favourite to win? The more probably winner is Sao Paulo