The Right Betting Tips and Predictions for Istanbul Basaksehir vs Kasimpasa

This has been one of the most delightful matchups in recent seasons in the Turkish league due to its level of competitiveness. To set the right bet for Istanbul Basaksehir vs Kasimpasa, read about our predictions and betting tips for free:

The home team was reinforced with some interesting players for their upcoming European challenges. The Grey Owls might have a better season than last year, so we expect them to win their first match. The home team won the last three matches against Kasimpasa.

As in recent years, we expect this matchup to be a high-scoring affair. In the two h2h last season there were a total of eight goals, and in each game, the result was more than 2.5 goals. In each of Kasimpasa’s last ten matches, there have been three goals or more.

It has become commonplace for both teams to score when they play each other this has happened in six of their previous h2h sites. In the away team’s last six matches there have been BTTS. Istanbul Basaksehir has scored in each of the three official matches they have played so far.

A First Match With High Expectations

The Grey Owls had a strong performance last season, in which they finished in fourth place, earning the right to play in the European cups. Despite having only one preseason game, the team has had a good run of form in their first official matches.

A win and a draw against Maccabi Netanya allowed them to advance to the next round, where they defeated Breidablik Kopavogur 3-1 in Iceland. Coach Emre Bolozoglu will be hoping for a winning debut in the domestic competition ahead of the second leg of the Europa League qualifier.

The Apaches had a slight improvement on last season’s performance, scoring more points than in previous years. Even so, they finished in eleventh place, a long way off the European competition places.

For coach Umit Sengul one of the objectives will be to improve on last season’s position, and getting into the top four would be the biggest success. However, the poor performances in the pre-season suggest that the start of the season will be tough for Kasimpasa.

A Great Analysis of Istanbul Basaksehir vs Kasimpasa Stats and Odds

If you want to bet on the top odds for Istanbul Basaksehir vs Kasimpasa, check our selection of odds from the best betting sites: 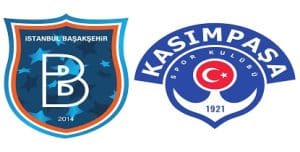 Who is the bookmakers’ favourite to win? The more probable winner is Istanbul Basaksehir at 3/4 (1.75) Odds