In this article, we will talk about the upcoming League One match between Ipswich and Shrewsbury on Saturday. If you want to see more League One predictions, you are welcome to check out our website.

Our Betting Tip Recommendations for Ipswich vs Shrewsbury

The list below contains our top suggestions and predictions for the Ipswich vs Shrewsbury fixture on Saturday.

The odds here are all from 888Sport and were correct when we posted this. Before wagering makes sure to double-check them at the bookmaker’s platform.

Ipswich is trying not to drop below the relegation line again, which could happen if they are not careful. They need this win against Shrewsbury and they don’t have any disadvantages, like suspensions or injuries in their way. They also have a positive head-to-head history with Shrewsbury, so that is a plus for them.

The Shrews haven’t had a good season, so far with only two wins, so far this season. Shrewsbury also can’t say they have performed well against Ipswich in the past because they haven’t won a game against them ever, the only time they were even close to a win was their last draw in May this year.

Below, you can check out the most recent match histories and statistics for the Ipswich vs Shrewsbury match-up on Saturday. 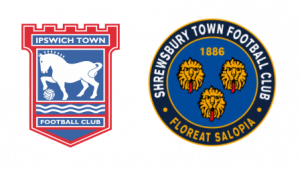