One of the more exciting duels of the round in League One is the Ipswich vs MK Dons matchup. If you are interested in learning more about this game, check our preview of the game and our free betting tips.

Our best betting tips and predictions for Ipswich vs MK Dons

If you can’t seem to choose the right bet for Ipswich vs MK Dons, take a look at some of our favourite betting tips for this match:

It’s been a difficult start of the season for the former Premier League club since they’ve only managed to win one point in the first three rounds. The guests have been a bit better, but our prediction is for Ipswich to win this match. They are the better team on paper and they are playing at home, so we feel it’s time for them to get their first win of the season. Also, Ipswich won three of the last five duels against MK Dons.

Despite the tradition, we predicted a match with at least three goals. Now, despite the tradition, we also predict a match in which both teams will score – which only happened twice in the previous five duels between Ipswich and MK Dons. However, all three Ipswich matches in League One this season have ended with both teams scoring, while the same is true for two out of three MK Dons games.

Ipswich vs MK Dons preview: Can Ipswich get out of their poor form?

The home team will want to put the poor start behind them with a win in this game, so we expect an interesting match. With that in mind, let’s take a closer look at both teams ahead of their upcoming duel:

The former Premier League club has struggled at the start of this season since they lost two matches already out of three, while the third was a draw. So, they are still without a win, including their appearance in the EFL Cup, in which they’ve been eliminated by Newport at home. With that in mind, this next match is very important for the team to snap their poor streak or things will look even more dire for them.

After a solid finish last season which saw MK Dons end up in the 13th place in the League One standings, the team has started the new season in a similar manner. In the first three matches in the league, they have one win, one draw, and one loss, so they have been a bit inconsistent at the start. Meanwhile, the team was humiliated in the EFL Cup since they were eliminated after Bournemouth beat them 5-0.

The best odds and helpful stats for Ipswich vs MK Dons

You can find the best odds for Ipswich vs MK Dons right here since we’ve selected the odds from a few different UK bookies: 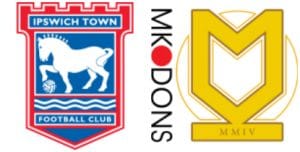