Both teams to score - no

The two teams have a short but adamant history – Inverness are the better of the two teams. It’s going to take a lot of effort for Stirling to get anything out of this clash so our Inverness vs Stirling prediction for the Scottish FA Cup is for a solid Inverness performance.

The four games between Stirling and Inverness tell a story – it’s not the most interesting clash we can see as there have been only a few goals scored.

Stirling did get one victory against Inverness in the past but it was after a penalty shootout. Those four games that we’ve had in the past between Inverness and Stirling ended with three draws and one victory for Inverness after 90 minutes of play. Inverness is currently in 6th place in the league and the team will search for a good performance against Stirling in the Scottish FA Cup as well. We believe that Inverness has what it takes to get the three points here.

Check out some of the important facts for this game.

Inverness are currently in 6th place in the Scottish Championship. Coach Billy Dodds’ players earned six victories, five draws, and five losses in 16 games. There are some injury issues in the home squad. The likes of Shane Sutherland, Austin Samuels, and Tom Walsh will miss this game.

Stirling Albion are in 2nd place in the Scottish League Two. The team managed to get nine victories, three draws, and three losses in the first 15 games. Just recently Stirling played a home game in which the team had zero goals on target.

Don’t miss out on the opportunity to familiarize yourself with our Inverness vs Stirling odds and stats:

Inverness vs Stirling questions and answers for this game: 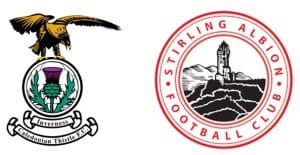