NOEVIR Stadium Kobe in the city of Kobe will be the destination for the game between Japan and Ghana. The two nations have made it to the World Cup 2022 in Qatar and this game is one of the few final pieces of preparation.

Japan look to recover from a 1-0 defeat suffered at the hands of Brazil in the recent friendly match. The match appeared to be heading for a goalless draw before a late penalty from Neymar spoiled the hopes for the Asian team. Ghana once again failed to make their dominance count when they managed a 1-1 draw with Central African Republic.

Japan have been playing some excellent football over the last few months. The team even came very close to getting something out of the game against five-time world champions Brazil. Japan will be quite hungry to get success in the Kirin Soccer Cup 2022, as it will form an excellent base for the World Cup preparations. Ghana are missing several key players ahead of the game and they are also low on confidence.

Ghana have been able to score at least once in four out of the last five matches. Japan, though, have been very strong at the back and very few teams have been able to get any joy against this defence. As a result of missing players like Jonathan Mensah, Ghana’s offence is likely to be damaged.

Japan are hoping for a first clean sheet since March after conceding late against Brazil. Ghana are missing several key players and they are not at their full strength. This game may present an opportunity for Japan to get a clean sheet.

Japan went for a 26 man squad that does not include the likes of Hidemasa Morita and Yuya Osako because of injury. However, there is place in the squad for the inclusion of Daizen Maida and Kyogo. The same squad will go on to feature in the friendlies against Paraguay and Brazil.

Ghana come into the four-nation competition in Japan with some big names being absent from the squad. For the Kirin Soccer Cup 2022, Ghana will be without Jonathan Mensah, Gideon Mensah, Elisha Owusu, and Joseph Wollacot. Some of these players have picked up illnesses and injuries in the last few games. There is not much confidence in the Ghana squad owing to the recent poor form.

Detailed Stats and Numbers for Japan vs Ghana

FAQs on Japan vs Ghana game 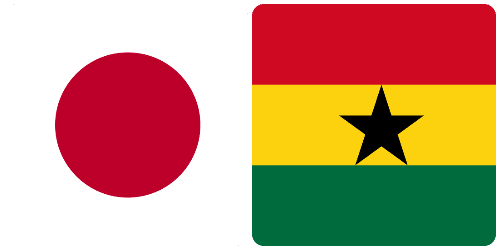 Where is the match going to take place? NOEVIR Stadium Kobe