NOEVIR Stadium Kobe in Japan will be the location for the match between Chile and Tunisia, who come into the game with a contrasting set of fortunes. This will be the first-ever meeting between the two nations.

Chile endured more struggles just after missing out on qualification for the World Cup, as they were beaten 2-0 by South Korea in the recent friendly match. Tunisia were able to get the Africa Cup of Nations qualification campaign to an unbeaten start after the goalless draw with Botswana in the recent match. This was preceded by a 4-0 success over Equatorial Guinea in the first group game.

Tunisia are unbeaten in four matches coming into this match with their last defeat coming in January at the hands of Burkina Faso. Chile, on the other hand, are very low on confidence with four losses in the recent five matches. The lack of any impetus in the recent loss to South Korea hints at further problems within the squad. Tunisia, though, do not have a great deal of offensive threat that can help them take advantage of the same.

This match features two teams who have had major struggles with regard to scoring goals. Even though Chile have scored four goals in the last five competitive games, three of these goals have come in the win over Bolivia. Meanwhile, Tunisia have scored five goals in the last five games but four of these goals came in the win over Equatorial Guinea.

Chile are without a goal in three consecutive games and their fortunes are unlikely to change much against a Tunisia team who are quite strong at the back. Tunisia have managed four consecutive clean sheets since January.

Tunisia are in a heightened joy at the moment after qualifying for back-to-back world cups. The national team has also made a very good start to the Africa Cup of Nations qualification program for the 2023 edition.

Detailed Stats and Numbers for Chile vs Tunisia

FAQs on Chile vs Tunisia game 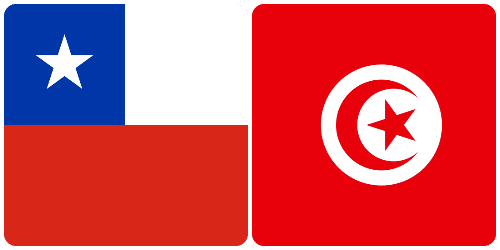 Where is the match going to take place? NOEVIR Stadium Kobe

Who is the favourite team to win the game? Chile