The home team will have the chance to seal passage to the next round if they do badly against the Colombian guests. This will be one of the two big matches in Group E, where the bottom of the group could finish first at the end of the day.

To set the right bet for Internacional vs Independiente Medellín, read about our predictions and betting tips for free:

In the previous head-to-head played on matchday 3, Internacional obtained an important victory on Colombian soil. This was a hard-fought match where a goalless draw prevailed until the 54th minute when Internacional finally opened the score and the score remained unchanged. We deduce that this will be a similar match with goal opportunities for both teams, but in the end, Internacional will take a new victory.

Both teams played an excellent game in the quarter-final stage, beating their opponents in their style. Both were able to score against two teams with two of the best defences in the current season. It is therefore very likely to see a result with 3 or more goals in the next match.

In the previous match, both teams had many clear chances to score, but their finishing was not the best. We hope that this time both teams will be in tune and celebrate some goals with each other.

Internacional vs Independiente Medellín Preview: a decisive battle to reach the quarter-finals

After being eliminated from the Gaucho Championship, Internacional have improved their game. In the last 7 matches, they have four wins, two draws, and only one defeat.

The previous matchday they missed the chance to climb up the table, due to a nil-nil draw. Despite 23 shots, only 3 of them were on target.

Independiente Medellín drew 0-0 with Nacional, in a clásico matchup that lacked excitement. This match was played at the Polideportivo Sur stadium, and the only highlight was the sending off of two players from the opposing team.

With this draw at home, DIM lost the opportunity to equal Nacional in third place in the local league. Moreover, on the previous day in the Copa Sudamericana, they had already made it difficult for themselves to qualify by losing to Internacional at home.

The best analysis of Internacional vs Independiente Medellín stats and odds

If you want to bet on the top odds for Internacional vs Independiente Medellín, check our selection of odds from the best betting sites: 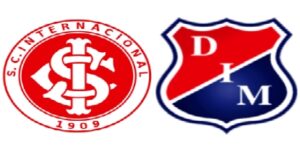 Who is the host? Internacional is the host at José Pinheiro Borda Stadium in Porto Alegre, Brazil

Who is the bookmakers’ favourite to win? The more probably winner is Independiente Medellín