The two teams that will meet in the fifth round of the Brazilian Serie A have started the new season similarly. So, if you want to know more about the Internacional vs Ceara game, check our preview and get some free betting tips:

Our best free predictions and betting tips for Internacional vs Ceara

Although Palmeiras is the clear favourite in this game, there are still many betting options to explore here. In any case, we have selected a few of our top betting tips for Palmeiras vs America Mineiro:

Although the home team is not in such a great form, neither is Ceara. With that in mind, our prediction for this match is for Internacional to win the game since they are playing at home and they are the better team on paper. Furthermore, Internacional has won three of the last four matches between these two teams, so they know how to deal with Ceara.

Internacional to Win at Half Time

While we are pretty confident in our prediction that Internacional to win to win the game, betting on them to win at half time is a bit more risky. However, Internacional led at half time in three of the last five head-to-head matches against Ceara, so we don’t see why they can’t take the lead at half time once again.

The last four meetings between Internacional and Ceara have ended with one of the teams keeping a clean sheet, so we don’t see any reason why that can’t happen once again in this game. In addition to this, three of the last five Internacional fixtures in all competitions have ended with one team failing to score, while the same is true for two of the last five Ceara games.

Internacional vs Ceara preview: Will we see an exciting duel here?

Since both Internacional and Ceara have four points so far in the new Serie A season, we should be seeing a close duel when they meet on Sunday. So, let’s check the teams out in more detail:

The new season has not started as well as the team from Porto Alegre expected. In Serie A, they’ve only won once in the first four matches, along with one draw and two losses. In addition to this, Internacional was eliminated from Copa do Brasil by a Vitoria despite winning the first leg. So, things could definitely be better for them. Also, Internacional is currently without Guerrero who is away on international duty, as well as a few injured players.

Just like their upcoming rival, Ceara also has four points from the first four matches in the new season of Serie A, but the team failed to win a game in the last five matches they played in all competitions since they have also been eliminated from the Brazilian cup by Fortaleza. In any case, Ceara probably hoped for a better start to the season. Fabinho, Jacare, and Ricardo are all injured at the moment and unavailable for the next match.

The best odds and stats for Internacional vs Ceara

You can find the best odds for Internacional vs Ceara right here, so check out our list of UK bookies with top odds for this game:

Common questions for Internacional vs Ceara 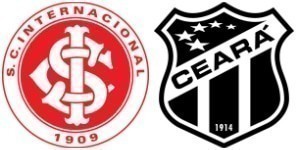