With the poor results of the last 3 matchdays, the home team is moving away from the top of the table and loses favourites. After drawing the previous matchday, the away team has now gone 5 matches without a win, including 4 defeats.

To set the right bet for Gimnasia La Plata vs Lanus, read about our predictions and betting tips for free:

In the last h2h, Lanus won 3 times and drew 1. In the last meeting between the two teams, the coaches of each team were not the current ones. In the current tournament, Gimnasia has not lost at home, while Lanus have lost every away game. We expect a win for the home team.

The average number of goals in total at Estadio Juan Carmelo Zerillo is 2.00 goals per game. 4 matches have been played at this stadium and only 1 time more than 2 goals have been scored in the same match. Based on this data, we think that only 1 or 2 goals will be scored in this match.

The home team has 3 consecutive games without scoring. They have conceded just 1 goal in 4 home games. The away team tends to have few shots in each match. Gimnasia will probably keep a clean sheet again.

Will The Host Return To Winning ways? – Gimnasia La Plata vs Lanus Preview

El Lobo has lost ground in its fight for the championship lead. In the last 3 matches, they have lost 2 times and drawn 1. In that period they have gone from leading the table to occupying the eighth place.

In the previous match, Néstor Gorosito’s team visited River Plate, which completely dominated the match. Gimnasia lost possession constantly and simply prevented El Millonario from scoring. However, in one of their many shots, River managed to beat the Lobo goalkeeper.

After 9 rounds, El Granate is still at the bottom of the table with only 6 points. In the previous matchday, they had a tough match against Vélez Sarsfield. Although Lanús played at home, it was minimized by Vélez’s performance.

Most of the duel was played in Lanús’s field, who had to contain Vélez’s repeated attacks without much success, as El Fortín scored twice. Despite playing with a man down in the last 30 minutes, El Granate equalized the score and saved at least 1 point.

If you want to bet on the top odds for Gimnasia La Plata vs Lanus, check our selection of odds from the best betting sites: 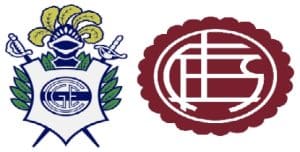 Who is the host? Gimnasia La Plata is the host at Juan Carmelo Zerillo Stadium in La Plata.

Who is the bookmakers’ favourite to win? The more probable winner is Gimnasia La Plata at 19/20 (1.95) odds