Huddersfield will be looking to complete a giant-killing by stopping Everton at the second round of the League Cup for the first time since 2001-02. This preview will focus on this game that will take place at the John Smith’s Stadium.

Huddersfield made it back-to-back league wins after a 2-1 success over Sheffield United at Bramall Lane during the weekend. Everton were pegged back by a 2-2 draw by Leeds United at Elland Road, as the blues failed to hold onto a lead twice in the game.

Everton to win the game

Everton come into this match with a spectacular record in the League Cup after having progressed past the second round of the competition with ease for more than two decades. Huddersfield have made a decent start to the Championship season with seven points from the opening four matches. However, the recent form of Huddersfield has been starting to look up. Even though Everton’s away form has been very patchy in this early part of the campaign, they have a lot of quality compared to the opposition and the blues should come out on top.

The away matches for Everton have been quite mediocre even towards the end of last season. Apart from narrow wins over London outfits Arsenal and West Ham, Everton have not been able to get much enjoy in the last few months. This is partly down to a lot of goals being conceded. In the opening two rounds, Everton have shipped three goals. Huddersfield may not be the top scoring team around, but they have come up with at least a goal in the last four games.

Huddersfield have been able to score in all matches since the first round League Cup encounter against Sheffield Wednesday. Everton’s patchy defence should give the home team a lot of belief and confidence, while Everton themselves are quite good going forward with five goals scored in the opening two rounds.

Huddersfield though not have any fitness concerns ahead of this match and the recent uplift in form might give the team a lot of confidence coming into the game. Manager Carlos Corberán is likely to go with a full-strength set-up so as to take advantage of any players being rested by the visitors.

Everton might be interested in the possibility of resting key players like Calvert-Lewin and this could seriously impact the away team’s strength coming into this match. Everton do have a strong record against Huddersfield with four wins in the last five. Everton manager Rafa Benitez could once again be rotating his team. Cenk Tosun and James Rodriguez are the players unavailable for Benitez.

Analysing the Various Numbers for Huddersfield vs Everton

FAQs on Huddersfield vs Everton match 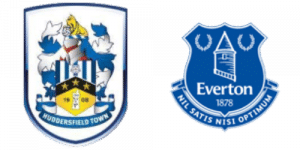 Where is the match going to take place? John Smith’s Stadium

Who is the favourite team to win the game? Everton